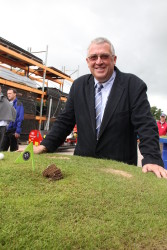 Campey Turf Care Systems is one of Europe's largest independent grounds care machinery suppliers, and this year the company has held a number of events to celebrate 25 years of trading in the sports turf industry.

As many are aware, Richard Campey has been instrumental in bringing to market a large number of innovative machinery products from all parts of the globe. The list seems endless - machines like the Koro Field Top maker, Koro Recycler, Dakota Spreaders, Vredo seeders, Imants and Raycam decompactors/sand injectors.

This equipment, in the right hands has transformed the quality of playing surfaces at every level, and no more so than at the top football premiership levels where the KORO Top Field Maker has revolutionised the way Groundsmen can renovate their pitches, removing Poa annua and providing them with a brand new ryegrass surface each year.

Richard started his working life in farming, before taking a career change to join ICI In 1976. As a twenty-two year old, he moved to SISIS, working under the redoubtable Eric Staniforth, founder of the company. It was here that Richard fell in love with turfcare machinery. He was able to travel the world as a sales demonstrator, all the time learning from his straight-talking mentor.

In 1986 Richard decided that it was time for a change. He set up his own company, Professional Turf Care, to carry out sportsturf contracting in and around the Manchester metropolis. It was a profitable area and during this time Richard saw a niche in the supply of second-hand machinery.

He moved to his present location, just outside Macclesfield, two years later and the company and premises have gradually expanded year on year. His regular dealings with customers in the second-hand market led to him fulfilling local demand and eventually taking on new machinery dealerships and stock.

Richard was always keen to attend equipment shows, both at home and abroad, and it was when he was over Holland in 1996 that he first saw the Koro machine. "I was very impressed with the machine's simple yet effective design and, as a contractor, I could immediately see a good market for them." In that same year the Koro Field Topmaker was stripping off the first football pitches in the UK, courtesy of Richard.

Next to catch his eye was the Dakota range of topdressers, and in 2001 a distribution deal was agreed, but this time with European rights included. In addition Campeys added to their own Raycam range of innovative products, including Hi-lift Trailer, Striegel Harrows and Speedresser, large capacity drop spreaders.

What stands out, above all else, is Richard's ability to recognise an opportunity when he sees one, and turn it into an industry standard.

To help celebrate twenty five years of successful trading, Richard thought it appropriate to organise an open day and invite many of his customers, suppliers and colleagues whom he has had the pleasure of working with during that time.

A number of Richard's sheds were turned into exhibition areas and a large tented marquee was set up for 200 plus guests.

Day one was a Demo day and barbeque, inviting many Campey customers, including turf professionals, suppliers and members of the press.
Three hundred and fifty people attended the first day, enjoying the various machinery demonstrations, social networking and a fantastic BBQ lunch. Richard also ensured his visitors all went away with a memento or two of the day. The day also included some presentations by guest speakers, notably Henry Bechelet from the STRI, Ian Mather Brewster from the IOG, Carl Pass (Premier Pitches), and Dave Saltman (Pitchcare). These speakers gave an insight into the working of the sport turf industry and congratulated Richard on his achievements.

There was a great turnout of groundsmen and greenkeepers, including some of the best known leading football club groundsmen. I caught up with Ian Forshaw from Wigan Athletic, Lee Jackson and Tony Sinclair from Man City and Man United respectively, and Steve Braddock from Arsenal. I also spoke to Carl Pass and Jonathan Woolfall of Premier Pitches, who undertake a lot of the end of season renovations for many leading football clubs.

There were many old work colleagues from Richard's SISIS days and other fellow contractors. Picture right Ian Forshaw Wigan Athletic

The second day was somewhat more sedate, with demos taking place in front of Campey dealers, but it was now a case of gearing up for the final leg of the celebrations with a great evening of entertainment, presentations, live music and auction.

Around 250 people, including all his dedicated staff and their partners, had been formally invited to attend, and guests started to arrive at 6.30pm to be met by Richard and his wife Jean. A magician was on hand to entertain the crowds, showing some traditional close up magic routines. I must say the quality of food and drink on offer was superb, being supplied by local Macclesfield firms; the caterers were 'Vanilla in All Seasons', and 'pourapint.com'. I think it was probably the first time for many, to see a Quail egg, let alone taste one!

Pictures below show top left Carl Pass, top right Dave Saltman talking about the turf care industry and ratifying the Richard had achieved. Below left, the Magician in full swing along with the BBQ

After the food it was time for some thanks you's and presentations from Simon Grumbrill, who was keen to enlighten people to the immense gratitude he has for Richard and for the work they have achieved over the years.

Simon was keen to show two videos that had been made as a thank you, which highlighted Richard's skills and humour, the first being a very funny insight to Richard's character and how he deals with staff. Many thanks to Joe Pemberton HG at Manchester United's Carrington training ground for an hilarious piece of editing. The second video involved a set of testimonials from many of the leading Head Groundsmen from football clubs at home and abroad. The list included the likes of Paul Burgess (Real Madrid), Chris Hague (Copenhagen FC) and Joe Pemberton (Manchester United FC).

It concluded with a testimonial from Carl Pass who was sitting in a New Holland tractor; a very funny ending. See the following links to watch the videos.

Simon then presented Richard with a 'in-house' designed and manufactured weather vane and it was then time for Richard to thank everybody for their support and mention a few memories he treasured from 25 years in business. He thanked his wife and family and many of his longest serving staff of which two, Mick Parks and Tony Cundall, received special gifts Flowers were presented to his daughter Julia for organising the two-day event.

After all the official thanks you's it was time for the live entertainment, with Funky Monks, a five piece guitar band from Liverpool, playing two sets of popular songs.

Between sets Poggy and Brian auctioned off a great array of top football clubs shirts and memorabilia that along with the silent auction raised a grand total of £5138.

The night was completed with a very grand firework display that lit up the sky and provided the icing on the cake for everybody as a special night to remember.

1986 - Set up Professional Turf Care as a contractor and used machinery dealer with a £15,000 loan
1988 - Purchased the land and premises at Marton Hall Lane. Company still based here today
1989 - Entered the new machinery market with Australian Coremaster, Iseki tractors and the Lesco range. Jane Middleton joins the young company as Company Secretary
1990 - Took on Tony Cundall as Sales Representative
1994 - Changed to New Holland Tractors
1996 = Introduced the KORO machines to the Groundscare industry
1998 - Won the sole KORO distribution rights in the UK and Ireland. Simon Grumbrill is taken on as Sales Representative for South Yorkshire, Derbyshire, Staffordshire and the West Midlands
2000 - Introduced the Dakota range of Turf Care equipment from the USA. David Briggs joins the team as Sales representative for UK and Europe
2004 - Sales team expanded further with the appointment of Ian Campbell as Product Specialist for North Manchester, Lancashire and West Yorkshire
2005 - Took the decision to close the contracting side and sold contracting business to Souter Sports
2006 - Spare parts side of the business is expanded to meet a growing demand. Simon Gumbrill promoted to Sales Director
2008 - Ian Pogson comes out of retirement to join Campeys and use his vast industry sales knowledge
2009 - John Campey takes over the running of JC Machinery - the Agricultural machinery arm of Campey Turf Care
Brian O'Shaughnessy employed to develop the market in Ireland and David Harrison appointed Export Sales Manager to expand the global markets
2010 - The relationship with Imants was consolidated with Campey being appointed official distributors for Europe, the Middle East and Africa - for Imants and Koro by Imants range Julia Campey appointed Marketing Co-ordinator for the Campey Group assisted by Mandy Caton
2011 - Mick Parks reaches the 20th year working for the service department. His current position is Outside Service Engineer