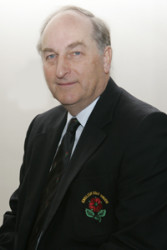 Richard Palmer, former Chairman of the Championship Committee, has been installed as President of The English Golf Union at its Annual General Meeting at Woodhall Spa.

Palmer (pictured left - photo courtesy of Tom Ward), who succeeds course designer and former Sunday Telegraph golf writer Donald Steel, returns to the sharp end of EGU life after a year away. He spent the previous five years as Chairman of the Championship Committee overseeing all the EGU's on-course activity.

And it is partly because of this work that Palmer regards etiquette and the spirit of the game to be key elements of his year at the helm.

"I have not come into office with a theme in mind but those who know me know how strongly I feel about these facets of this great game," he says.

"When we updated the rule book a few years ago I was involved as one of the chairmen of the R&A's Etiquette Sub-Committee and we rewrote the etiquette section. Golf is unlike many sports in that it relies for the most part on integrity with little supervision.

"Players rule themselves in a disciplined manner with courtesy and sportsmanship. This is what we call the spirit of the game and is something I hold dear. I will expect to see a lot of it this year."

However, he is also determined to watch a lot of good golf without the pressures of being in control of all EGU championships and tournaments.

"I'm really looking forward to the events following on to my involvement as a referee and as championship chairman," he adds. "My great joy will be to watch great golf from all ages, from the under 14s to the over 55s.

"I shall be at everything I can be but I'm particularly looking forward to attending my first US Masters and to be at the Walker Cup in Ireland. They will be two of many highlights of this special year."

The son of an army officer, Richard was born in Crowborough, Sussex, in 1943, but spent much of his childhood at various locations because of his father's postings. However, after preparatory school in Crowborough, he went to Radley College where he played cricket, tennis, hockey and particularly fives. He became a member of the MCC at the age of 19.

His pre-occupation with other team sports meant that golf took a back seat in his early years. Although he took up the game at the age of seven, he admits to retiring at eight and rarely played again for ten years.

After deciding not to follow his father into the Services, he joined Lloyds Bank in 1962 in Bristol and spent 33 years with the company. He filled many postings in the South of England such as Guildford, Sevenoaks, the Isle of Wight and London before his final destination at Folkestone as senior manager of a group of branches.

It was then that he adopted Kent as his base, moving to his present home at Sandwich Bay alongside the Royal St George's course where he has been for 14 years.

His nomadic life as a banker meant he has been a member of several clubs such as Bristol & Clifton, Shanklin & Sandown, and Knole Park. But it was when he joined Royal Ashdown Forest in Sussex in 1968 that he really got bitten by the golfing bug and the other sports were discarded. It was also the start of life in golf administration as he was elected to the club's committee almost immediately and became their youngest captain in 1977-78.

Still a member after almost 40 years, Richard got down to one handicap despite admitting to never having a lesson, and played county golf for Sussex for six years. He also saw action in the Brabazon Trophy and the English Amateur Championship, tournaments he has overseen in recent years.

He served on the Sussex County Committee in the mid-1970s then became their representative on the EGU for 30 years. He was Sussex captain in 1987-89 and president for three years from 1997-99, including their centenary year.

Richard has been a member of the EGU's Executive for almost 25 years. He is also now involved with the European Golf Association and during last year ran several of its championships on the Continent.

These days, his commitments mean his own golf is generally confined to the winter months while his handicap has risen to six. However, he has played for Radley in the Halford Hewitt for over 30 years and was its playing captain when the school won the title for its only time in 1996.

He has also been a member of the Moles Golfing Society for many years including 23 as Honorary Secretary and is a past captain, and has run the Old Radleians GS for 35 years.

Outside of the game he involves himself with charity work and is practising churchman, being the treasurer of his local church, St Clements, for the last 12 years.

He is the first EGU President from Sussex since Frank Pennink in 1967, who was his proposer for membership of the R&A.

A bachelor, Richard is one of four children. His elder sister is deceased but he has two younger sisters.