During our recent trip to Malaysia, New Zealand and Australia I had the chance to catch up after nearly five years with your editor Rob Jenkins. The purpose of my trip being to help our dealer in Malaysia, RS Machineries, to ensure that the machinery they had purchased and sold was working correctly, and that they were fully up to date with its working principles.

Photo of Koro Field Top Maker and Koro Harrows (above)

The Koro by Imants Field Top Maker was being put to use on school football pitches in Kuala Lumpar (KL), ensuring that when the school children come back after their Christmas break, that they would have the perfect level playing conditions.

After being shown the sites of KL and surrounding countryside, it was then on to New Zealand (NZ), to meet up with Rob Briscoe, Managing Director of Turf Tech, based in Auckland, who had recently purchased a large quantity of machinery off ourselves, after first seeing it put through its paces when he visited us last July, attending our Open Day to celebrate 25 years in business

Photo of Rob Briscoe and Geoff Hatton at our Open Day, July 2011 ( right)

We put to work for the first time the Koro by Imants Top Drain installing it on a job that Turf Tech were carrying out at the prestigious Kings College, Auckland 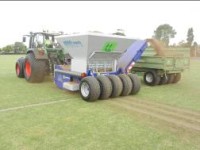 The Koro Top Drain installs three trenches up to 24cms deep at 50cms apart, depositing the spoil into a trailer running alongside, at the same time backfilling the three trenches with sand. This is the only machine in the world which can do this, and Kings College will certainly benefit from this over the next years, ensuring that they have the best drained pitches in New Zealand. 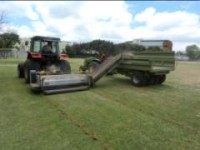 Also purchased by Turf Tech was a 2mtr Koro by Imants Field Top Maker, this was being put to use on another school in the Auckland area, this time with the verticut /scarification rotor fitted and with 3mm tungsten tipped blades at 34 mm spacings. In this configuration the machine will operate up to 40 mm deep ensuring that the thatch layer is penetrated down to soil, in order that surface water can penetrate the soil, and not remain in the top layer, causing problems. You can be assured that the Koro Field Top Maker will help anyone who uses it in any configuration to have the ultimate quality playing surfaces.

This is a testament to the founder of the Koro range of machinery, Ko Rodenburg, who now has many of his machines working at the top venues throughout the world, from Manchester United Football Cclub, All England Lawn Tennis Club Wimbledon, Arsenal Football Club, Real Madrid Football Club, Singapore Jockey Club, to name a few.

After everyone was happy with the way the machinery was performing it was then time to catch up with two of our former UK customers and colleagues. Steve Dun who is Course Manager at Formosa Golf Club just south of Auckland and Lee Horton, ex Stockport County Football Club Head Groundsman, who both emigrated to NZ last year and through their vast experience are helping to improve the quality of the playing surfaces which they are now working on. 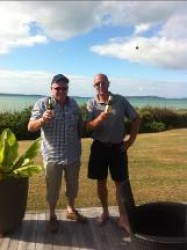 It was then on down to Taranga to meet up again with Bob Seivwright and his colleagues at Trimax. We have been dealers for Trimax, here in the North West of the UK, for twenty years, ever since they first exported them to the UK. It was nice to meet all the team again and to have a factory visit and a sneak preview of new ideas and models that will be coming to market shortly.

Our final night in NZ we had a great BBQ and a few bears watching the sun go down over the Auckland water from the back garden of Steve Dun's house in Beachlands.

Photo of Richard and Steve right

Next day we flew to Melbourne arriving late on Friday, and met up with a former employee and now the owner of Pitchcare Oceania, Rob Jenkins.

Photo of Rob and Richard left 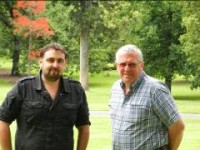 must say he has been living the good life and put a few pounds on since I last saw him. I have to say that Pitchcare is a great

way of sharing information as it has helped the whole turf care industry, and it will only go from strength to strength.

After visiting Melbourne, we drove to Lakes Entrance on the South East of Australia and then headed north through the Snowy River National Park area, and onto Canberra. From here we headed to Jervis Bay to meet up with a good friend of ours Geoff Hatton (and distributor for the Koro machinery).

Here Geoff introduced us to his brother John and other members of the Hatton family. John was a well respected former Australian MP, and both John and his wife have done much for their local communities and local indigenous people, a truely remarkable gentleman.

We were taken out by the Hatton's, around Jervis Bay to see the unspoilt countryside, and at last we found some Kangaroos; we were beginning to wonder if there were any in OZ! I also learnt how to throw a boomerang, and yes it did come back to me!!

It was then up to Cobbitty Turf Farm to meet Geoff's wife Phyllis and to be well fed and watered, Phyllis is a great cook and you will never leave their table hungry, or sober, after proper Ozzie red wine!


All in all we had a great time, meeting up with former colleagues and most important of all, ensuring that some of the best quality grounds maintenance equipment available to fellow Turf Professionals is working at its optimum. We arrived back in the UK after three weeks away in summer weather, to be met with our first snowfall of the winter


Photo from my back garden and Kangaroo