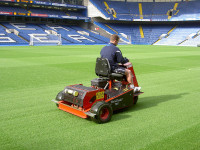 Premier League champions Chelsea FC have enhanced the quality of their Stamford Bridge pitch by adding a ride-on Verti-Drain 7007 turf aerator to their machinery fleet.

Head Groundsman Jason Griffin chose the 7007 as a lightweight machine that minimises the risk of ground compaction, while still providing aeration to depths of up to 6in (15cm).

"Regular aeration is vital as it softens the ground, improves drainage and invigorates the turf," says Jason. "The 7007 goes deeper than any other ride-on machine that I have seen on the market."

The 7007, which is distributed by Charterhouse Turf Machinery, weighs only 1120 lbs (510kg). Powered by a 16hp Briggs petrol engine, the three-wheeled machine is highly manoeuvrable and has a top speed of 6.5mph. Hydrostatic drive means that a single foot pedal controls speed, with no need for a clutch. Vibration is minimised owing to the careful alignment of the tine assembly.

The tine arms on the 7007 are crankshaft driven, ensuring that the maximum force is transferred for the most effective aeration.

Chelsea is very familiar with the benefits achieved from using Verti-Drains. They already had two tractor-driven models, which are used at Stamford Bridge and at the Club's training ground at Cobham, in Surrey. 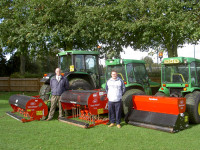 tines up to 14in (36cm) long. They are used year round at the Cobham training ground and for renovating both pitches at the end of the playing season.

Both Stamford Bridge and the training ground feature fibre-reinforced rootzones. A total of 15 staff help Jason maintain them.

Another recent purchase that Chelsea made from Charterhouse is a SpeedSeed 1600 overseeder. It incorporates individual cast rings to enable tight turns to be made without damaging the turf, and the application rate is adjusted by a clever system of gear wheels. Seed falls only when the side wheel of the SpeedSeed is turning, so there is no risk of spillage when the machine is at rest or being moved between sites.

The SpeedSeed is based at the training ground, but Jason plans to use it at Stamford Bridge next summer.