by David Warner
in Renovations & New Builds, Schools & Colleges, and Synthetics
on 05 Nov 2013

By English independent school standards, Millfield School is something of a newcomer, having been established in 1935 in the mansion formerly owned by the Clark family, whose shoe factory (and now shopping village) dominates the small Somerset town of Street.

In this relatively short period of time Millfield, as it usually referred to, has become one of the top independent schools in the UK and enjoys an enviable list of notable alumni, including many of the current crop of England cricketers, international rugby players, Olympians, writers, broadcasters and even the Crown Prince of Thailand.

To maintain this production line of sporting talent requires facilities of the highest standard and, here, Grounds and Gardens Manager, David Warner MSc. NDT, explains the reasoning and methods used to resurface a water-based hockey pitch that was in need of an update.

"In 2012, Millfield School decided to resurface one of their artificial hockey surfaces as the carpet pile was, in places, measuring as low as 3mm. Although, to the naked eye, the surface appeared in relatively good condition it was underperforming in a number of aspects, including surface drainage, whilst the surface was being torn as the pile height was so low that the integral strength of the carpet diminished, requiring regular repair. Playability for the end user was inadequate; hardly surprising after twelve years of high usage on a polyethylene carpet.

The process of material selection was instigated by looking at the various carpets available and the developments in their manufacture over the last decade.

Selection of Material and Contractor 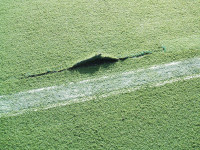 The next step was to contact carpet suppliers to discuss materials available and to view samples. These were then discussed with the Director of Sport and Director of Hockey who also had experience of playing on numerous surfaces.

The decision was made to install Tiger Turf WETT, a dense, polyethylene monofilament designed for high performance, but also with a reduced water application, which was an important ecological part of the selection process.

Once the material had been finalised, the project needed to select the contractor. A number were contacted to price the project, with Buckinghamshire based Spadeoak being awarded the contract. 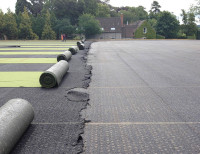 The surface was already in place, so this was, in effect, a resurface. But, as part of the process, the carpet was requested to be of a different colour blue with a green surround, as opposed to the single green colour of the original surface, so we needed to discuss this with our local planners.

We contacted our local planning authority to request a Lawful Development Certificate as part of the Town and Country Planning Act 1990 section 192, as there was a change to the visual nature of the carpet. This was duly granted, after the determination period, and we were then able to progress with the project and the confirmation of dates and timescales.

Spadeoak visited the site to look at all aspects of the project and to discuss timescales, with the project plan compiled as follows:

Brief description of works: Take up the existing synthetic grass and shockpad, load into skips and remove from site; this surface will be replaced with Tiger Turf WETT Pro laid onto a new 'insitu' shockpad. 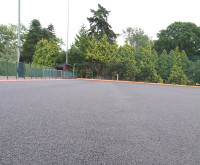 Preparation: Take up the existing synthetic grass and shockpad and remove from site.

The project was to begin on the 3rd July and be complete by 30th August 2013. The site was handed over to the principle contractor to ensure compliance with Construction Design and Management Regulations 2007 (CDM), and the contractor supplied the information pack that includes Quality Policy, Certificates, Insurance and site health and safety, including method statements and risk assessments to the school and ensured that their work area was sealed.

The 3rd July arrived and the site began to take shape with the work starting almost immediately. The first job was to build the compound and to secure the site with regards to CDM regulations. Once this had been completed, the surface carpet and shockpad were removed - at this point, it was the first time the tarmac base had been viewed for twelve years and it was an opportunity to assess its condition and integrity. The base proved to be in good condition, but with the requirement to deal with a couple of level issues, and to give the tarmac surface a thorough clean with a pressure washer to remove the debris that had migrated through the drainage holes in the carpet over twelve years to provide even drainage over the entire surface.

Both of these stages were vital to the success of the project because surface levels and drainage are crucial to the playing characteristics for hockey.

Once the tarmac surface levels had been addressed, the cleaning had been completed and the quality agreed, it was then on to the next stage which was the laying of the insitu shockpad. This was agreed to be a 12mm insitu rubber crumb shockpad using 2-6mm SBR (styrene-butadiene rubber) commercial rubber granules bound with polyurethane binder 8% by weight. This process, when completed, was then allowed to cure for seven days.

Also, as part of the project and during this period, the tarmac that surrounded the carpet was replaced and colour coated to enhance the playing environment.

Once the paint and shockpad had cured, it was on to laying the carpet. This was the final part of the process and it was essential that we had regular contact with the contractor, and that each step was assessed to ensure the quality finish the school demanded. 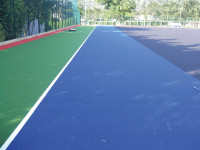 The project was completed by 23rd August ready for the start of the school term. It took fifty days from start to finish and has provided the school with a high quality hockey facility for the foreseeable future.

We will now begin the process of maintenance to ensure the longevity of the surface, which will include regular sweeping, litter and debris removal, moss and algae control, linemarking as required and any repairs as necessary.

Deep cleaning of the water-based hockey pitch will be undertaken at regular intervals during the life of the surface to prevent build-up of contamination."