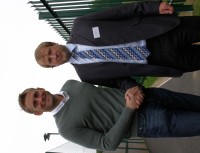 The centre, which was once a commercially run Powerleague 5-a-side complex, was acquired last summer by the Norfolk FA. With help from Norwich City Council and Agripower, the centre was transformed into the FDC with nine fully floodlit 3G synthetic pitches, including one 'Wembley' show arena, changing facilities, a function room and bar.

The cost of the redevelopment has been met partly by grants from the Football Foundation and Norfolk Youth Fund which will see the centre being used by up to 3,500 players per week by this time next year.

Although being hampered by the coldest winter on record, the Buckinghamshire based contractors worked tirelessly in delivering an exceptional facility and one of the most sought after football centres in the country. The project saw the reconstruction of ten five-a-side pitches using the new Lano Sports FIFA 1* MSXi60 mm 3G surface, together with additional drainage, landscaping, fencing, car park and storage area works.

Shaun Turner, Chief Executive of Norfolk County FA said that the FDC was for the whole community and added that the centre is a unique development for grass roots football and was overjoyed that City College Norwich had agreed to become their official partner. The partnership gives the college access to much needed outdoor facilities with their sports course currently being over-subscribed.

Robert Green's appearance to open the facility backed the centre's aim of encouraging football in the community saying: "It's a tremendous thing for Norfolk FA to introduce into the community. If this can encourage kids to improve their football, I'm sure it will prosper in a footballing sense as well as in a community sense. It's ironic that I'm here to promote grass roots football when it's not grass out there!"

Agripower was formed in 1964, undertaking most aspects of agricultural contracting work. It was during this stage of the Company's development and expansion that the importance of land drainage was realised. From 1968, they have specialised in all aspects of land drainage and since 1978 they have become well established within the sports turf industry, concentrating on the design, construction, drainage and maintenance of all sports and amenity areas.

Agripower are members of SAPCA, LDCA, BALI, and STRI ensuring a high standard of workmanship is maintained. Supervision of the workforce and direct contact with the client is personally undertaken by the directors, three of which have been with the company since it was formed 40 years ago.