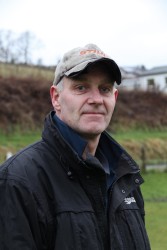 "Seeing the course in the depths of winter doesn't do it any justice. It looks fantastic in the summer when all the leaves are on the trees and the grass is growing well"


It is the oldest course in the borders region, having been founded in 1877. Located on the picturesque Vertish Hill on the outskirts of Hawick, the town is perhaps now best known for the manufacture of cashmere garments from well known brands Peter Scott, Pringle and Lyle and Scott.

Colin Montgomerie, Tony Jacklin and Nick Faldo (who holds the professional course record of 64) are all honorary members.

Thanks to its high elevation, Hawick Golf Course offers some of the most spectacular views to be found in the Borders. This becomes evident as the course climbs from the 4th tee, and meanders around the natural contours of the Vertish Hill, whilst the 15th tee is 850 feet above sea level and commands some beautiful views.

This parkland course would certainly be a challenge for any golfer, with its sloping fairways and testing hole positions, but it is probably the weather that causes the greatest challenge with the course's hilltop position exposed to the elements.

I can certainly vouch for this during my visit. From the moment I arrived it was raining, and getting around the undulating course was quite a slog in the heavy, sodden conditions.

I was met by the club's Head Greenkeeper, Kenny Robson, who has spent the best part of his life (thirty-three years and counting) working at Hawick. The club only employ two full time members of staff, plus a summer seasonal, to maintain the course. Kenny's assistant is Alistair

George who has been with the club two years and, in the summer, they get an extra pair of hands from Callum Macleod, who helps out during the months of June, July, August when the grass is growing at its peak.

Kenny was keen to show me around and explain the issues he faces with having limited resources in terms of staff and materials.

"Maintenance regimes are kept simple," explained Kenny. "In the main, it's about keeping the course playable and presenting it in the best possible light. Seeing it in the depths of winter doesn't do it any justice. It looks fantastic in the summer when all the leaves are on the trees and the grass is growing well."

All the greens are soil push up with little or no drainage. However, there are some very old agricultural primary drains running across parts of the course, due to the fact that most of the land was prime grazing prior to the course being built. "I reckon they must be over one hundred years old," stated Kenny. "Many of them have collapsed or become blocked so, this winter, we are beginning the task of replacing or, where possible, repairing them."

Kenny explained that it was simply a case of digging down to find the broken pipes and replacing them with new drainage materials. It was interesting to see how well the old clay pipes had stood the test of time, with many still in good condition.

As we walked the course it was apparent that it was suffering from a lot of water runoff, with many parts lying very wet, a result of its hillside location, no doubt.

"Alistair and I share all the jobs between us, taking it in turns to do various tasks throughout the week," he explained. "We cut the greens daily during the summer months and at least three times a week at other times of the year. Tees get cut two or three times times a week in the summer, and fairways twice a week."

"It can take well over four hours to cut the greens; this is because, on the way round, we'll also rake the bunkers and move tee markers. Tees take a day to cut and fairways about a day and a half, so time is precious when you consider all the other work that has to be done. We do tend to work longer hours during the summer months to get the tasks done."

"It's about being as efficient as we can," stated Kenny. "We aim to get an early start, ahead of the golfers coming out, to minimise disruption to their game. They are, after all, our lifeblood."

The club has around 350 members and, because the 'Cashmere' connection draws a lot of visitors to the area, there are always a number of golfing societies coming along to play the course.

"We keep our renovations fairly simple. In spring, the greens are scarified, hollow cored and topdressed, and this is repeated in late August, along with some overseeding. We aerate the greens twice a year using our Weidenmann Terra-Spike and, at other times, use our Groundsman 345 vertical solid tine spiker when time and weather permits."

"Feeding is kept to a minimum," explained Kenny. "A granular is applied in the spring, followed by a couple of summer applications and then, perhaps, an iron feed in the winter months."

Fridays are always the busiest days for Kenny and Alistair, setting up the course for the weekend play. It's virtually a non- stop operation from 7.00am to midday to get all the jobs done, It is hard to imagine how on earth they continue to do it week in, week out.

However, Kenny knows only to well that, with limited staff, there is only so much work that can be achieved. "The consequences of not having enough time to do some of the more essential work often comes back to haunt us," bemoaned Kenny. "In recent years we've noticed an increase in thatch levels on the greens, and I put this down to a limited budget for topdressing, coupled with the restricted amount of time we can spend working on them."

"I'm very aware that the thatch is getting out of hand, and last year's poor weather has exacerbated a surface water problem on many of the greens. Some are very sodden and anaerobic."

"We've no primary drainage on any of the greens, so it's a case of carrying out good cultural practices to keep the surface open. However, with the rain being so persistent in the last few months, even the fairways have become very wet, which restricts heavy equipment access to any of the greens at the moment."

"The likelihood of putting new drainage into the greens is not an option as the club simply do not have the funds at the present time to even consider going down that route," explained Kenny. "Instead, I looked at the cost of having them sandmastered in the spring - once they have dried out, of course! The expectation is that, over time, this operation will firm up the greens, reduce thatch levels and help them drain more quickly. I've had a good quote from a local contractor to do all the greens, and the committee has agreed to invest in this option."

Having spent a couple of hours walking the course with Kenny, you could not help but admire what he and Alistair are achieving on a daily basis, and this is largely down to their enthusiasm for the job.

As we made our way back to the shed to get some respite from the persistent rain, Kenny pointed out a sign dedicating a path to the 'voice of rugby', BBC commentator Bill McLaren, who was a native of Hawick and a lifelong member at the club. He also showed me a cairn, on top of which was a plaque highlighting just what may be seen from that vantage point. This was completed in 2008 and, as Kenny stated, enhances the golfing experience.