0 Rochdale AFC - Spot on at Spotland 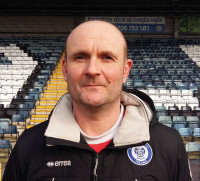 Fifteen months into his new role at Rochdale AFC and head groundsman Rob Bennett is already fully aware of the budgetary differences that exist in Football League One compared to the seemingly endless stream of money available to near neighbours Manchester's United and City. Yet, he and his small team do a fine job thanks to the support of CEO Colin Garlick

Rochdale Association Football Club is based in the town of Rochdale in Greater Manchester. Formed in 1907, the club plays out of the 10,249 capacity Spotland Stadium, their home since being accepted into the League in the early 1920s. Since that time, the club has remained in the bottom two professional divisions of English Football and achieved promotion three times - in 1969, 2010 and 2014. Although the club has never won a competition since joining the League, they have the distinction of playing in the final of the League Cup in 1962, the first of only two teams from the lowest tier to have done so.

With some rather well-to-do neighbours, 'The Dale' count Bury and Oldham Athletic as local rivals; not for them, the millions available to their Premier League neighbours.

Spotland benefitted from three new stands in the 1990s and early 2000s. The only remaining stand pre 1990s is at the Sandy Lane end, which is a small terrace behind one of the goals. 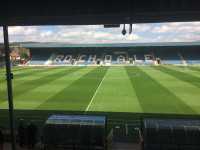 Spotland's Head Groundsman is Rob Bennett, who has been at the ground just fifteen months. "I first started working in the industry with my dad when I was around sixteen years old. I got my first full time groundsman's position at Orrell rugby union club, before moving to Wigan Athletic's training ground, followed by becoming a full time groundsman at Middleton Cricket Club. From there, I came to Rochdale."

He was first inspired to work in the industry by his grandad; "he had the perfect lawn and everyone who walked past the garden would stop and admire it. He took great pride in his grass."

Not one to shy away from extra personal development it seems, Rob has completed his NVQ level 2 and is in the process of working towards his NVQ level 3, as well as having earned various certificates in maintenance and preparation of cricket squares and outfields. 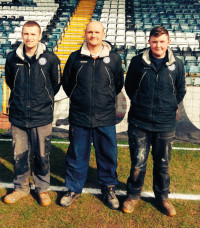 Working alongside Rob is Assistant Head Groundsman, Drew Duffy, who started volunteering at the club at the age of fourteen, and apprentice James Schofield who, at seventeen years old, is in the first year of his apprenticeship. Both Rob and Drew are compliant with all current legislation and Drew acts as First Aid Officer. The team has an "all hands to the pump" approach, and presentation ranks very highly on their list of priorities.

The FibreSand pitch is kept at 27mm all year round with two Dennis G860s. It is verticut during the summer and rotary cut with two Honda powered Kaaz rotary mowers used for clean up after every game. "We don't generally overseed much. We mark the pitch for the games using a wheel to wheel linemarker, which is pretty basic," Rob confesses.

The FibreSand pitch must be kept clean and free from poa, Rob says, and the team have a few additional systems at their disposal, including frost sheets, 5m centre pipe drainage and 1m sand banding. The pitch can suffer from snow and frost due to it being so high above sea level - they are close to the northern edge of the Peak District - so the frost covers are much needed, as well as the occasional help of volunteers to clear the pitch after heavy snow. "We can call for volunteer assistance via the club's website. I am rarely short of takers."

"The wetter winters have forced us to put more pipe drainage into the pitch in my time here," Rob tells us. "And we've also installed thirty tonnes of Redgra on the track around the pitch." 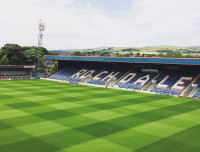 The end of season renovations undertaken by Rob and the team are affected by the fact that they share the stadium with the Rochdale Hornets, the Kingstone Press League One rugby league outfit. "With additional community use at the end of the football season, our renovation window is very short; we only have five to six weeks, so there is a lot of pressure on the groundstaff and contractors to complete the work within the allocated timescale."

Rob acknowledges the cooperation given by both the football and rugby club and the stadium company, Denehurst Park, in achieving this window.

"We koro off to a depth of 28mm, spread and ameliorate 130 tonnes of FibreSand and level and seed with twenty-five bags of Johnsons Premier Pitch and a pre-seed fertiliser." 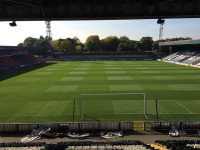 Rob purchases machinery from a local dealer, but confesses that he isn't loyal to just one manufacturer. "We have two Dennis G860s, two Kaaz rotary mowers, a Jacobsen 3 unit ride-on mower, a New Holland tractor, Charterhouse Verti-Drain, a Hardi sprayer, a tractor mounted dimple seeder and a wheel to wheel marker." On his wish list? "A Toro ProCore and a new Toro ride-on mower," he confirms. "Servicing is undertaken by a local company, Mayday Machinery."

Rob confirms that he and Drew aim to attend as many industry shows, seminars, demo days and road shows as they can. "It's all part of our ongoing training and development. And it's helpful to know what's out there when it comes to new equipment, products and services."

Rob's attention to detail and presentation is admirable, and having an additional pair of hands in the shape of apprentice James is allowing him to achieve more. "Are we undervalued as a profession still? Perhaps, but it is getting better; we groundsmen are now being recognised more for our hard work and not simply just as grasscutters."