0 Rockliffe Hall - a jewel in the golfing crown 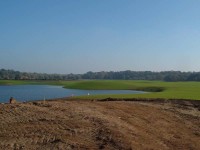 Due to open in June 2009, the Rockliffe Hotel and Golf Resort has been built adjacent to the Middlesbrough FC training ground.

Designed by Marc Westenborg of Hawtree Ltd., the course was built by constructors MJ Abbott.

The country estate where Middlesbrough Football Club has a state-of-the-art training facility will soon be complemented by a new luxury leisure development.

Rockliffe Hall Limited is developing Rockliffe Hotel and Golf Resort on a 150-hectare complex adjacent to the Club's prestigious training ground at Hurworth, near Darlington. The brainchild of Middlesborough's Chairman Steve Gibson, it is planned that the development will become the North East's newest five-star leisure attraction. 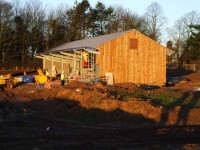 The historic Rockliffe Hall, a run-down 19th Century mansion, is being sensitively converted and authentically renovated and refurbished to create a luxury 63-bedroom hotel. Up to 500 jobs will be created in constructing and ultimately staffing the new development.

The jewel in the crown for golf enthusiasts is an exclusive new golf course that, at over 7,800 yards from the back tees, will become one of Europe's longest, and one that sensitively harmonises with the existing landscape whilst adding striking features that will make it one of the most exciting new courses in the UK.

The golf course is situated to the south of the hall and covers an area of approximately 116.2ha. The southern and eastern boundaries are defined by the River Tees. Middlesborough Football Club's training ground and sports complex lies immediately to the west. 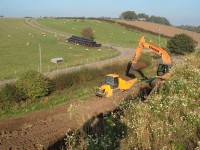 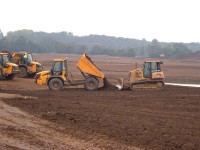 Designed by Marc Westenborg of Hawtree Ltd., the par 72 course combines modern with traditional, classic with dramatic. The primary strength of any course lies in its routing - without a strong routing, a golf course can never be great. It is the backbone and underpins all the other elements of a notable design.

Areas of wetland habitat have been introduced as part of flood attenuation measures. The development introduces new landscape features and habitat areas into an area of farmland that was ecologically poor and devoid of any features of special landscape value. New landform an d planting will integrate the site into the surrounding countryside, creating a more diverse and visually richer landscape with a range of appropriate habitats.

A flood risk assessment was conducted during the planning phase and the course has been cleverly routed through the flood plain to serve this essential role whilst ensuring that the playability of the holes is not jeopardised. Ever conscious of the environmental responsibilities of a golf course designer, Westenborg has preserved and even enhanced this vital wildlife habitat.

Guy Holmes, a director of Browne Smith Baker, principal architects for the Rockliffe Hall development said that creating the course on a flood plain had proved an immense challenge to the golf course designer and constructors. "We have to accept floods and deal with them, and let the water go out sensibly. It's been a very involved engineering exercise," he said.

But the creation of a great golf course does not lie solely in the hands of an architect. It requires collaboration between many disciplines - designer, hydrologist, ecologist, constructor, and maintenance team. 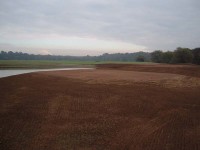 Golf course constructors, MJ Abbott Limited, have moved almost one million cubic metres of earth during construction and have designed and installed complex gravity and pumped drainage systems. They have also installed a state of the art Rainbird irrigation system to greens, surrounds, tees and fairways.

By completion of the project in June 2009, the constructors will have undertaken all aspects of the work including earth moving, shaping, drainage, irrigation, cultivation, lake construction, landscaping, and early maintenance. Commenting on the highly testing layout, Contracts Director Nigel Wyatt said, "The vision applied to the plans is second to none. Not only will it be a stunning course, but the distance from the back tees will make it a challenge for even the world's greatest golfers."

Constructed to USGA recommendations, the greens are seeded with a blend of creeping bentgrass varieties (Penn A4 and G6) and will be maintained to the highest standards. A fleet of Toro equipment will make up the bulk of the machinery inventory and David anticipates a staff of 16, comprising 12 full-time and 4 casuals, including a mechanic and irrigation technician, by the time the course is open for play.

Newly appointed Course Manager, David Cuthbertson, who was at Slaley Hall for twelve years before accepting the post at Rockliffe, is a staunch Sunderland FC fan but is now proud of his association with Middlesborough FC. He welcomes the challenges and responsibilities of such a prestigious development and is fully aware of its economic and historical importance to the area.

Rockliffe Hall is a Grade II listed building and is steeped in grand North East history. Original plans for the hall date back to 1774, but it wasn't until the 1800s that the Hall and the estate started taking shape. Records from the 1820s list it as being known as Pilmore House. In 1918, the Earl of Southampton bought the estate and lived there on and off until 1948.

The Rockliffe Park estate was bought by the Brothers of St John of God and converted into a hospital in 1950. Some eighteen years later Durham County Council compulsorily purchased it for use as a Community Centre. Sadly, it stood empty for several years and was left to petty vandals until, in 1996, Middlesbrough Football Club bought Rockliffe Park, where it established its new training facilities.

Construction of the new championship golf course has tested the ingenuity of the construction team. Despite the proximity of the River Tees along the southern and eastern boundaries of the site, a stipulation of planning consent was that no drainage could be discharged into the river. Consequently, wetland areas have had to be created and are now a primary feature of the low-lying areas of the golf course. Lowland and marshland wild flower mixes will be established, creating wildlife havens and enriching the botanical diversity.

A complex arrangement of pipes and surface contouring directs extraneous water to the wetland zones, themselves being an intrinsic part of the flood attenuation measures. Designed to cope with 1 in 100 years flood intensities, it would be expected that their effectiveness would be difficult to ascertain. Not so! Three such floods have occurred in the last ten years. And the extremely wet year of 2007 was an ideal time to test the design. It passed with flying colours!

The nature of the site posed still further challenges. The high water table in the area, where a 60,000 square metre main irrigation lake was to be situated, necessitated the installation of a drainage system below the lake liner. Without such a system, the lake liner would rise and fall with the level of the groundwater.

he company's engineers designed an ingenious and complex scheme of pipes and control chambers to avert the problem. 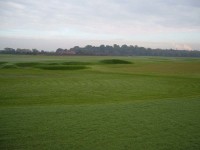 The original concept of the golf course architect was to locate an irrigation reservoir outside the boundary of the golf course, in an area where no groundwater problem would occur. However, soon after excavation commenced, the remains of a Roman settlement were unearthed and fifteen archaeologists descended on the site, declaring that the area was of historic importance and could not be excavated. An alternative location for the reservoir had to be incorporated into a revised golf course layout.

The new irrigation lake has, however, given rise to two of the most dramatic holes on the course. The par 4, 4th hole demands a tee shot that skirts the edge of the lake. How much of the lake a player carries is dependent on skill and nerve. The par 3, 5th hole is definitely not for the faint-hearted. An island green, surrounded by water and guarded by threatening pot bunkers at its entrance will intimidate all but the most confident of players.

The environmental benefits of the lake have been maximised by incorporating shallow marginal shelves and reed beds, providing valuable wildlife habitats. Five unobtrusive Otterbine aerators will preserve water quality and the pump house is skilfully camouflaged. Submersible pumps are also hidden from view in concealed chambers. There are no unsightly pipes, no dangling cables, and no ugly buildings.

With a project of this size, it is very easy for any small delay to have a major knock-on effect. The result is that completion dates can drift by weeks or even months. Days lost through weather conditions or down days, as they are known, can cause severe problems to both the contractor and their clients in lost time, financial additions and hazardous conditions.

It is testament to the constructors that the schedule has remained on track despite the tricky summer and autumnal conditions of 2007. Work commenced in May last year but, following one month of good weather, there followed seven weeks of some of the wettest weather on record. Devastating deluges brought work to a standstill and 65 employees stood idle, waiting for a change in fortune. Once more favourable conditions returned, a vast array of equipment and workers were directed to the site. Amazingly, they were back on track by late August and they were ready to seed 9 holes.

Rockliffe Hall estate is nestled within a rural community, situated close to the delightful, unspoilt village of Hurworth, near Darlington; a tranquil hamlet of picture postcard charm. Looking towards the village green at Hurworth life would appear to have always been idyllic.

But a dark secret lurks beneath the tranquillity of the village. For far below the village green lie the remains of more than 1,000 souls who fell victim to the Great Plague in 1665. The bodies lay ten deep in three mass graves covered with a layer of lime to aid decomposition.

There is no marker and no plaque telling of the horror that almost wiped out the 750-strong village - leaving only 75 behind to mourn their dead. But if you look closely the evidence is plain to see. Three huge dips in the village green map out the massive pits where the bodies were piled up one on top of another until the graves were full.

The village of Hurworth may conceal a dark and murky past but its future is definitely bright and clear. Where suffering and death once signalled its demise, recreation and health will soon herald its prosperity.