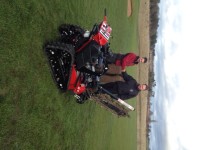 Peter and his team had been in need of a tracked trencher for some time and Dave Jowett, Head Mechanic has in the past serviced Baretto hydraulic rotovators. Impressed with the build quality, reliability and performance Dave searched the internet and found the Baretto trencher which is supplied by Midland Power Distribution Limited, Worcester. This led to arranging a demonstration which took place on a wet and windy Thursday morning. The demonstration was so successful the trencher never left the golf course, sold!

John McGhee Sales & Marketing Manager for Midland Power has already promised the team at Rockcliffe Hall that upon the UK launch of the new Baretto Fully Hydraulic Tracked Stump Grinder in the Spring of 2015, Rockcliffe Halls will be first on the list for a demonstration.