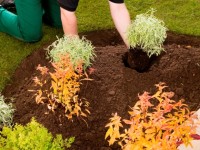 Due to increasing demand, Rolawn, Britain's largest turf grower and leading topsoil supplier have launched a topsoil specifically developed for beds and borders.

Available in a 1m3 tote bag, Rolawn Beds and Borders Topsoil is a fertile, organic rich, light and friable topsoil, analysed to BS3882:2007, that contains a controlled release fertiliser and a water retentive polymer.

The controlled release fertiliser provides balanced fertility to promote healthy establishment of shrubs and plants. The water retentive polymer forms a water attractive film on the surface of the organic fibres in the soil that holds water and enables the fibres in the soil to absorb water and to release it gradually as the plant requires it, resulting in reduced water consumption, improved growth rate and enhanced root development.