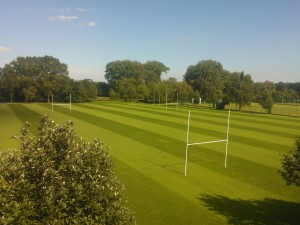 Headland Amenity's Multigreen fertiliser range has brought about a dramatic change on the hardworking playing fields of an Oxfordshire school.

When Rob Eason took over as Head of Grounds at Dragon School, a co-educational private school for 8 -13 year olds, the turf on the sportsfield was struggling.

"We have just 3ha here, and the 850 pupils play sport five days a week, plus matches on a Saturday," he explains.

There is one main cricket square, plus two others cut into the outfield. In winter the same land makes five winter sports pitches, and the school transitions from rugby to football for the winter and spring terms.

Four athletics tracks and rounders pitches are also marked out for the summer term, and the summer season culminates in Sports Day in early July, where the highest standards are expected. 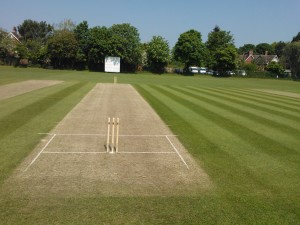 "The intervals for renovation and swapping between sports are very brief," Rob comments, "and the heavy use means that I try to keep the grass a little longer - we cut to 28mm for football. I'm also addressing the effects of such intense play, including compaction, with a monthly aeration programme."

Rob, who use to be the Senior Groundsman at Oxford University and comes from a greenkeeping background, consulted his contemporaries to help choose a suitable fertiliser regime.

"Headland Amenity's products are very highly regarded. Iain Richardson did soil analysis and suggested Multigreen 28:0:0 for the cricket outfield, on which the sward was weak and sparse," he explains.

"The results were instantaneous and remarkable, with the Fast Start granule giving an immediate green-up. But the polymer coated controlled release prill also gives it a long action for up to six months. In my opinion it is the Rolls Royce of fertiliser."

Plantains have always been an issue on the field, so on 23rd August, Rob applied a 'weed and feed' treatment with Xtend 46:0:0 slow release liquid fertiliser and Relay herbicide.

"This was also very impressive, with 88 per cent of the plantains gone, while the gentle slow release nitrogen in Xtend gave a beautiful colour and boosted the turf health, which was much needed after a long cricket season, with the resulting stress from close mowing." 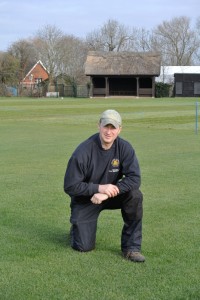 On 26th September, Rob applied Multigreen 15:0:22 at 30g/m² to keep the outfield going over the tough winter sports season.

"We have had long periods of low temperatures since then, but I can see the improvement compared with last year - the field is still green and is holding up well against the winter sports programme."

A healthy, well fed sward is also holding its own against disease, Rob reports. Red Thread was an issue due to last year's wet weather and despite using 'cut and drop' mowing to keep nutrients in the turf, but the long acting, slow release nature of Multigreen keeps it ticking over and helps combat disease.

This approach has also been effective on the cricket square, which Rob comments was 'very tired with lots of weed, and signs of red thread.'

"We used Multigreen 12:0:43 at 35g/m² and it has made a massive improvement - the square was sparse, but cover is now dense and healthy. Even a rep from a competitive turf products company complimented its quality!" 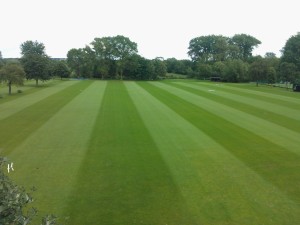 Rob also used Greentec fine turf fertiliser on the square in March, and subsequent testing has shown considerable improvement in rooting. Turfite and Seamac applications in the peak summer season give an instant green up, as part of a ten day pitch preparation that sees the wicket cut down to 4mm with clippings boxed off.

Renovation is a crucial period for such hard working turf, and here Rob has used C-Complex 4:3:4 to give the square the best chance of recovery after scarification, and despite the low temperatures, he is very happy with the results.

"As it is such a small site, we have to work hard to get the surfaces as good as possible," he comments. "We want to be the envy of other schools, but also to provide the pupils with the best possible sports facilities. I've been very impressed with the results of using Headland Amenity's products and have developed a great rapport with the company's team."