Rosebay willowherb (Chamaenerion angustifolium) is an erect, rhizomatous, perennial, native on waste ground, embankments, rocky places, mountain scree and open woodland throughout the UK. It has been recorded growing at an altitude of 1,850 feet. Formerly uncommon, it became abundant in bombsites, burned areas and forest clearings.

Rosebay willowherb is favoured by conditions after woodland clearance and in the early stages of coppicing, but growth and flowering become restricted as the tree canopy develops again. In reclaimed bogs in Ireland it is an important early coloniser, but disappears as the vegetation matures. In Scotland, rosebay willowherb was a frequent colonist in unsown set-aside land, but was less common where a cover crop had been sown. Rosebay willowherb can be a problem weed in perennial crops.

The plant is tolerant of acid and alkaline soils, but does not grow in soils with poor mineral nutrition. It is usually absent from waterlogged soil, but grows in wet conditions around ponds as well as on dry sandy heaths and chalk downs.

Rosebay willowherb tolerates shade and a broad range of climatic conditions. It grows to a height of around 110cms.

Common in disturbed ground, along forestry rides, as a garden weed, or on abandoned land, this weed can be seen throughout the United kingdom. 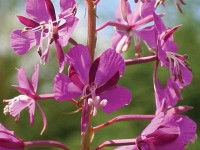 The plant has fine shallow rhizome root systems that can colonise areas quickly.

Flowering months are June to September. The flowers are rose pink, with fifteen or more in spikes at the top of stem. Once pollinated, the flower produce seed pods in early autumn that can hold between 300-600 seeds each equipped with a hairy parachute. Even a gentle breeze will carry the seeds over a large distance to colonise new areas.

Rosebay willowherb grows on any waste ground, or newly cultivated land, particularly when the seed bank has been disturbed, thereby stimulating germination of any seed in the ground.

The plant's leaves are shaped like those of the willow tree which gives it its most common name.

Other fairly common names include: Great Willow Herb, Blooming Sally, Blood Vine, Common Fireweed, Perennial Fireweed and Narrow Leaved Fireweed - fireweed because it thrives on areas where there has been a bonfire. The heat from the fire actually helps the seeds to germinate. 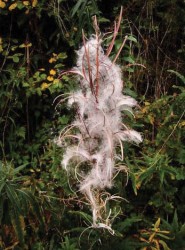 The best cultural control is to hand weed before flowering. It is important to remove as much root growth as possible. Continuous cutting down will also, eventually, exhaust plant populations.

Chemical control - Apply total herbicides when plant growth is active. There are a number of products available for controlling perennial weeds. These chemicals are best used when the weeds are actively growing, usually between April-October.

Ensure you follow manufacturer's directions, health & safety and product data sheets, and comply with COSHH regulations, when using these chemicals.

Herbicides are an effective tool where high quality turf is desired. However, they must be applied with care and accuracy, and in the context of a good overall turf management programme.

Before using any herbicide, carefully review the label for conditions of use, including rates, methods of application, and precautions. Never use a herbicide in any manner contrary to its label and be sure that the herbicide will not injure the turfgrass species

Timbrel can be used in a variety of ways throughout the year, depending on the season and the target species. It is rapidly absorbed and translocated throughout the plant preventing growth of unwanted vegetation.

Benefits of Timbrel - Developed specifically for use in forestry, woodlands and on non-crop land to selectively remove undesirable weeds without harming grass cover. It is a key ingredient in overall vegetation management programmes.

It has been developed for use on weeds in amenity vegetation, enclosed waters, hard surfaces, natural surfaces not intended to bear vegetation, land immediately adjacent to aquatic areas and open waters.

Its unique biactive formulation gets more glyphosate into the plant, and offers superior, long term control of difficult perennial weeds, It biodegrades in soil and water, nad has excellent rainfastness.

The product is preferred under COSHH.

Glyphosate, the active ingredient in Roundup Pro Biactive, controls weeds by blocking the plant's enzyme system. These enzymes, which are present in plants, do not occur in humans, animals, birds or fish. Hence, Roundup Pro Biactive is safe to everything except green plants.