A rugby club installing a 3G pitch no longer raises eyebrows but it isn't every day that you see a side in National League 1 spend in the region of £1.5 million on such a project 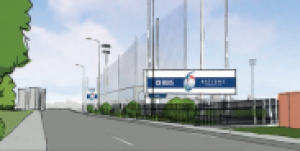 That seven-figure sum also covers work on a new stand and other improvements but it is an indication of the ambition of Rosslyn Park that they have taken the plunge ahead of the new season.

Having finished second in National League 1 for two years running and been the most successful semi-professional club in the country, the club feels ready to make the step up to the next level and managing director Shaun Justice says the plans for Priory Lane are pivotal to it doing so.

"We are very ambitious and we want to play at the highest level of rugby that is financially affordable, so wherever that takes us. The off-field model is moving on constantly and it is a totally different club to what it was two or three years ago or even this time last year," he told Running Rugby.

"The idea is that we want the off-field to drive the on-field rather than the other way round, so we are putting a lot of work and investment into what we do off the field and we want to take the rugby on the field as far as we can.