by Charmian Robinson
in Industry News
on 17 Nov 2011 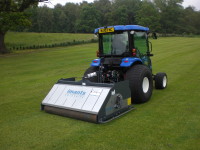 King William's College is a leading independent school for ages 3 to 18, situated near Castletown on the Isle of Man. Head Groundsman is Mike Atherton who is extremely experienced in all areas of groundsmanship and is well known for his interest and contribution to the groundsman industry as a whole.

Mike was experiencing long standing issues with poor surface drainage on the college playing fields. "We carried out several tests in early 2011 and poor infiltration rates due to a dense thatch layer were identified as the main cause of the poor surface drainage." Said Mike "So plans were put in place to identify a machine that would work alongside a hollow coring and harrowing programme to improve thatch control."

Mike looked at several machines, and asked respected peers and it was soon clear that for them the Imants Rotoknife was the most suitable tool for the job. "We had not had the opportunity to view one in action," continued Mike "I attended the Campey Turfcare 25th anniversary on July 7th, 2011. After inspecting the machine, and following a demonstration, my initial feelings that it was the machine for us were confirmed. A deal was struck with Campey Turfcare, and the machine was delivered to the Isle of Man shortly thereafter."

The Imants Rotoknife is a versatile, effective linear aerator, designed to relieve surface compaction, improve aeration, reduce thatch build up and remove surface water. The Rotoknife is fast across the surface and is also a versatile rootzone management tool. It offers flexibility in working depths and linear spacings, allowing deep slitting to a depth of 150mm or shallow slitting at 50mm spacing and is an ideal rootzone enhancement tool for both warm and cool season grasses and can even be used as a surface smoothing roller.

"We have since used the machine intensively as part of our winter pitch renovations, and as part of our on-going programme of frequent surface aeration, and deep slicing, I can only speak highly of the machine." Said Mike "Several benefits have already been noted, with thatch levels decreasing rapidly, thickening of the sward, increased root depth, and improved surface smoothness are all factors which have been evidenced to date, and surpassed my expectations. With these benefits being evident over such a brief period of working with the machine, I look forward to the results following another growing season."

"Ease of use and maintenance are other factors which attracted me to the machine. The lack of any mechanical parts also aided in my decision to purchase, as with the ever increasing general service and running costs involved in grounds maintenance in general, reliability is something that is high on my list of priorities."

Mike also praised the sales and after sales service from Campey Turfcare "It has also been first class, and I would highly recommend that the Imants Rotoknife be a consideration for anyone looking to improve their maintenance regimen."