Rugby World Cup 2011 officials have thanked Rotorua for its contribution to a hugely successful tournament. 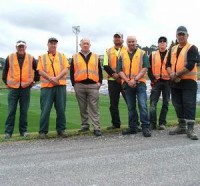 Memories of the All Blacks winning the Rugby World Cup were brought to the fore yesterday at a special event to celebrate Rotorua's contribution to the event. Groundsmen and Events & Venues staff were among those invited to Te Runanga Tea Rooms in the Government Gardens to watch two film montages of the tournament as part of a farewell tour.

"We couldn't have done it without our regional partners - it's activated the whole country and we became a stadium of four million." Mr Winters said it had been hard to adjust to life post Rugby World Cup as the tournament had been a major part of the city since it was announced New Zealand had been awarded the hosting rights in 2005.