0 Rovers aim to be Moyles better!

During the course of my work I get to hear about many unsung heroes in our industry; groundsmen who work tirelessly for their respective clubs which, without their efforts, would barely be able to function. And so it was that I learned about Rob Smith, Head Groundsman at Featherstone Rovers Rugby League Club. 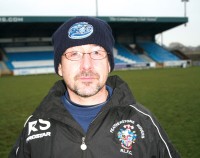 Both Steve Teale of Grassline and Jason Booth, Head Groundsman for Leeds Tykes and Rhinos, had told me about the extraordinary work he was carrying out at his beloved club.

Featherstone Rovers were formed in the town's Railway Hotel in 1902 and moved to their present Post Office Road ground in 1921. As a small mining town near Pontefract in West Yorkshire, Featherstone never attracted huge crowds but were viewed by a wider audience during the 'Eddie Waring' years of rugby league coverage on BBC's Grandstand. The present capacity of the stadium is 6,750.

When the Super League was formed in 1996 it was proposed that they unite with neighbours and rivals, Castleford and Wakefield Trinity, to form Calder RLFC which would then be eligible to play in the newly formed summer league. This was fiercely rejected by the club who have since failed to make it into the top flight of the sport.

In 2006 the club's board approached Chris Moyles, DJ on BBC Radio One's breakfast show and, more importantly, a 'huge' fan of the club, about possible sponsorship. Through his morning radio show he keeps his eleven million listeners up-to-date with Featherstone's results, regardless of whether they want to know or not! He was delighted to be asked, and the ground was renamed The Chris Moyles Stadium in November 2006. 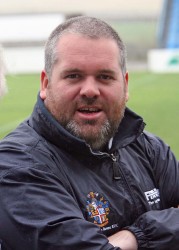 Rob Smith has been with the club since 1990 when he first got involved as a volunteer steward. He suffered an horrendous motorbike crash in the mid 1980s and had been unable to work for a long time.

The opportunity to become a steward at the stadium helped with Rob's rehabilitation and fitness after the accident and, over the years, he began to get more involved with club activities. Firstly, by looking after the changing rooms and club kit and, as his fitness levels improved, he started to help the then groundsman, Fred Levene, prepare the pitch. When Fred retired in 2003 Rob was offered the job.

Rob is responsible for looking after the main stadium pitch and two training areas adjacent to the ground. The pitches are heavily soil based with only the stadium pitch having a primary drainage system.

The rugby league season officially runs from February through to October. However, the pitches, especially the main stadium pitch, are in constant use for training all year round. The first team train on the stadium pitch at least three times a week.

With so much activity Rob often spends up to fifty hours a week on the stadium pitch alone during the playing season.
Rob initially learned his groundsmanship skills from Fred and by reading books and talking to other groundsmen.

However, in 2006, he decided he needed qualifications to help improve his knowledge and career prospects. So, he attended Askham Bryan College and passed NVQ level 2 in Sports Turf. This involved him attending the college, two days a week for two years and being assessed in the work place.

Rob managed to get support for the course through the GMB Union who paid all his fees, but the two years he was on the course restricted his time at the ground

When you see the amount of work involved it is even more surprising to learn that Rob is only contracted for eighteen hours a week; the rest of his time spent there is completely voluntary. And, on top of this, he also cleans the changing rooms and manages the kit on match days!

As for the maintenance of the pitches, Rob is restricted by the very limited resources. He has only recently acquired a John Deere triple mower and a Fleet Kombi spray jet marker to help maintain the pitches.

The stadium pitch only gets aerated when funds are available. Last year he managed to have it spiked three times and fed twice with some 9:7:7 NPK fertiliser.

End of season renovations are pretty much non-existent. Rob tries to increase grass cover by regular mowing and overseeding by hand when conditions allow.

During the playing season he mows the pitches at least three times a week, maintaining a cutting height of 35mm and, between October and March, cutting at 50mm. Most games tend to be played on Sundays so Rob usually gets the stadium pitch ready the day before using the JD Triple to stripe it up before overmarking.

Mondays are usually taken up by cleaning the dressing rooms and tidying up around the pitch. It is not until Tuesday that he manages to get back onto the pitch, hand forking the divots back and then using the triple mower to clean up and mow the pitch.

The rest of the week is spent repairing and mowing both the stadium and training pitches.

It is clearly apparent that Rob loves his job. Under the present circumstances he is struggling to get the pitches into the condition they should be for a club of this standing. He says that the only way forward is for him to have the resources at his disposal to bring the pitches up to a professional standard, which means more than just cutting and marking them out.

He is working with the club to identify the resources which would see the much needed investment in enhanced and additional equipment required.

His wish list includes a compact tractor and SISIS Quadraplay, along with an appropriate budget for end of season renovations, allowing scarifying, decompacting, overseeding and topdressing operations to be undertaken on all pitches.

His commitment to the club cannot be disputed. However, under the present circumstances, even with all the hours he works, voluntarily or paid, it is hard to see how he can produce and maintain the standards of playing surface to which he and the club aspires until the necessary resources are available.

The club recognises his needs and the requirements of the pitch maintenance programme, however the current economic climate is making it difficult to invest in enhanced resources.

A well-presented playing field provides so many benefits. Players become more confident, and their injuries less, plus the speed of the game improves, making it more enjoyable for both players and spectators alike.

A quality playing surface will also attract new and better players which, in turn, will help bring the success the club desire.