0 Roy Charman coping with the help of Headland Amenity 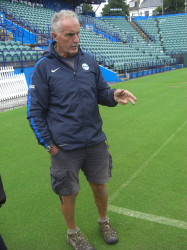 When you have one month between the end of a major tennis tournament and the start of another, how do you cope?

Roy Charman, Turf Manager at Devonshire Park International Lawn Tennis Centre in Eastbourne, talks us through the end of the AEGON Tournament, and the start of the County Championships - with club members in between to contend with as well!

The 2012 AEGON International took place the week before Wimbledon from June 16th -23rd. The event provides some of the world's top male and female tennis players with the opportunity to hone their skills ahead of the Wimbledon Championships. But when it's all over Roy Charman and his team of four full time staff including Roy have just a month to get the courts looking pristine again for the AEGON Summer County Cup held from July 23rd through to 27th.

Devonshire Park has two show courts and eight outdoor courts side by side. During events the park can become very flexible and have up to twenty one courts available. Preparations for the AEGON International involve construction of the stands and pavilions which damage large parts of the park. The regeneration work begins before the tournament starts and the damage begins.

Roy explains, "The stand for the AEGON International comes in usually 2 weeks prior to the event. But before that happens we cut the grass down to about 7 mm and apply a trinexapac-ethyl growth regulator to help the plant to retain its energy. The plant still grows but it doesn't elongate as much. If you can keep the plant strong and healthy, it will recover better when the stand comes down. This year, however, the stand was up for a week longer than it should have been so the grass was in a worse state than usual - it certainly had taken its toll."

While the grounds team wait to reclaim their turf there is plenty of work for them to do. The badly worn base line areas of the show courts have to be treated and, when they can get at them, the areas where the stands 'feet' were.

Roy again, "Basically we need to get some seed onto these worn areas. We start by using the Ransomes GA30 using a worn pencil tine - one that's really worn out as we're only trying to get about an inch into the ground. The conditions have to be right - hard, firm and dry - and using the machine as slow as possible to make the maximum number of holes. We make several passes, at different angles, and aim for nice clean holes to put the seed down, raking it in with a rubber rake. I'm currently using 70% ryegrass, 20% slender creeping red fescue and 10% chewings fescue. On the show courts we water that in and cover with a fleece for 2 or 3 days. We can't really top dress, but just put seed in - top dressing comes when we renovate properly later in the year."

Roy lets the whole area recover naturally, but once the new grass starts to establish, or about a week prior to players practicing, he gives all the courts a feed with Headland N-sure, Turfcomplex, Elevate Fe and a spray of Tricure AD wetting agent. "A cocktail of about 4 or 5 different things," he says. "I like liquid products as they're so much more flexible than granular. With a liquid you can apply more or less to suit, subject to the weather or how the grass is. You always get a nice even spread of product with nice even results - no streakiness."

Roy's last word is 'Flexibility and application - they're the key things', and results he and his team achieve are for all to see at this international venue.