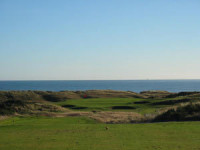 Tom Watson may have carried off the trophy at the British Seniors Open in Scotland this summer, but the real star of the tournament was the 225-year-old course. Royal Aberdeen, established in 1718 is living proof that the combination of a centuries old course, allied to skilled greenkeeping and modern technology can produce greens fit to host one of the most important events in the golfing calendar.

Situated on the east coast approx. 65 miles north of St. Andrews, the 36 greens of the 6th oldest golf course in the world did not always perform as impressively. Course manager Robert Patterson has had his work cut out from the time he arrived from Royal Dornoch, eight years ago, to bring his charge up to scratch.

"Although it's a links course it was very un-links like in the way it played," he says. "The greens and approaches were very, very soft with poor drainage and poor growth. Links greens should be fast and firm. We had a major problem with thatch and poor growth and it didn't take much rain to close the course even in summer."

Robert immediately increased the aeration programme on the greens. "We did a lot more coring, verti-draining and slitting, performing pencil tining almost weekly," he continues. "We top dressed with almost pure sand and still do." Staffing levels increased along with the workload, and having used Floratine to some extent at Royal Dornoch, Robert decided to incorporate their scientific approach into his maintenance programme. Working with Bill Byrnes of Floratine and Tom Brannan of Greentech, Floratine's Stirling based Scottish distributors, he sent soil samples to the states to be analysed by Analync, the comprehensive soil evaluation system that Floratine uses.

"The results just jumped off the page," remembers Brannan. "There were high levels of salt, chloride, bicarbonates and iron with low levels of available calcium and micro nutrients which were also un-available. It was like getting an Xray on the soil." Faced with the evidence, the two men devised a programme, which set out to redress the soil imbalance and, once this was achieved, increase plant health. As thatch was still prevalent a thatch degrading material called Thatch Buster, containing thatch-dissolving enzymes was applied directly to the affected areas, by spraying two to three times over the growing season. Tricel 35SP, a form of pure calcium which does not raise ph levels was applied as a soil amendment, while Pervade, the soil penetrant, Calphlex which helps remove Sodium, and Maxiplex which helps improve nutrient availability, were used to flush out excess levels of unwanted elements.

Robert's foliar feed programme, applied every 3 to 4 weeks included Astron, a high quality hormonal bio-stimulant to encourage root development on the greens (which had been stunted due to thatch), Renaissance, a micro nutrient package, Knife, a form of liquid iron, and Turgor, a silicone product which helps strengthen the internal cell structure, in turn speeding up the greens. Protesyn, which helps complete the photosynthesis process, (useful on a course this far north) and P.K. Fight a product containing phosphite and potassium which moves in and around the plant in a much more readily available form, completed the package.

"Since the original soil analysis, as conditions on the greens improved we have cut out thatch control products and modified our foliar and soil amendment regime," Robert explains. "Our soil is tested on an annual basis in winter when fertiliser applications are at a minimum, which gives us a more accurate picture of what is going that at other times during the year. Floratine is now incorporated into our turf management programme and I think that the reason it has been so successful here is the fact that we have run it in conjunction with our extended aeration and top dressing regime. It has been able to perform without hindrance."

Robert, who has received almost as many accolades as Tom Watson, has every hope that Royal Aberdeen will host the British Senior Open again in 2007.