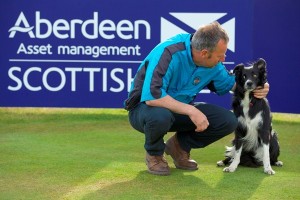 Royal Aberdeen Golf Club's Head Greenkeeper, Robert Paterson, has an unusual assistant to help him carry out his job - a blind border collie.

A familiar presence on the course, five year old Skye is the only dog allowed on the course which hosts the Aberdeen Asset Management Scottish Open this weekend.

Robert, Head Greenkeeper at the club for almost 20 years, says he could not do his work without the company of faithful dog Skye, who lost his sight at six months old after an accident on the course.

Robert says: "Skye's a constant companion and is always by my side. When the accident happened nothing could be done to repair Skye's damaged optic nerves but there was never a question of what we were going to do - we just adapted life at home and work to suit him and now you'd never know he was blind. Although he's lost his sight he knows every bunker on the course and uses his sense of smell and hearing to get around.

While the Scottish Open coming to Royal Aberdeen is an exciting time and career high for Robert, the event will be tinged with sadness for both Robert and his beloved dog.