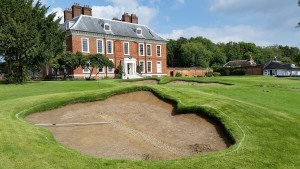 Creative Golf Design has successfully completed the first phase of a multi-year project to renovate the course at one of the world's oldest golf clubs.

Work on the first phase at Royal Blackheath, including bunker modifications on the 2nd, 17th and 18th holes, started in August 2014 and was completed in the second week of September.

Creative Golf Design is working closely with John Nicholson Associates in a holistic series of improvements, including a course-wide parkland restoration programme which will restore the golf course aesthetically to its authentic 1920s state.

It has been a year of successes for the Chester-based golf architecture and consultancy firm, which is headed by Ken Moodie, past President of the European Institute of Golf Course Architects.

In summer 2014 the company was awarded the 'Golf Renovation Of The Year' accolade in the Private: Less Than $1 Million category by influential golf industry magazine GOLF INC., for its restoration project at the Alister MacKenzie-designed Moortown Golf Club in West Yorkshire, England.

Royal Blackheath and Moortown are two of the latest classic golf clubs to entrust Creative Golf Design to carefully restore a historic golf course. The projects join previous historic golf course work at Royal Wimbledon, Alwoodley, Hollinwell, Aldeburgh and Roehampton in England, Wouwse Plantage in Holland and Dortmunder in Germany, in confirming the company as one of Europe's specialists in the delicate art of renovating what can be viewed by golfers as sacred ground.

In 2005 Creative Golf Design won the Club Renovation Of The Year award in GOLF WORLD magazine, for its work at another much-loved and historic venue, the 104-year old Coombe Hill Golf Club in Surrey, England. 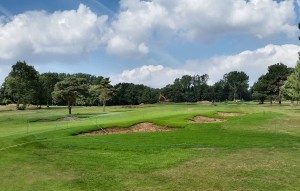 Ken Moodie is the second Scottish golf architect to be chosen to update Royal Blackheath, after James Braid last modernised the course in the 1920s.

"There's a natural thrill, and also a certain weight of responsibility, when you're asked to make alterations at one of the world's most historic golf clubs" said the 48 year-old Scot. "But even the most cherished golf courses change as a result of wear-and tear, past maintenance practices, in-house alterations and inappropriate tree planting. Successfully interpreting what makes the course special, and refining the challenge which golfers face at venerated clubs like Royal Blackheath requires experience, a deep appreciation of the history of the game, and a knowledge of the design style of the original architect.

"To be entrusted with revitalising the course at England's oldest golf club is a great honour" he continued. "We have received tremendous support and trust from the club and its members, and are looking forward to seeing the proposals we set out in our Course Review take shape. The redevelopment of the bunkers, together with the restoration of the parkland landscape which golfers would have enjoyed back in 1929, will restore the course to something like its former glory when James Braid completed his own two-year improvement project".


Club Secretary at Royal Blackheath GC, Gordon Hogg, explains why the club chose Creative Golf Design to perform the restoration. "CGD won our unanimous vote after a three-way competitive pitch in January 2014" he said. "I had worked with both Ken and John at previous golf clubs, so I knew their capabilities. Their standards are high, and they are very professional and easy to work with.


"The club has been considering parkland restoration work for several years," he continued, "and more lately we had also decided to invite tenders for bunker remodelling. By mid-October 2014, John's work will have restored some wonderful parkland views throughout the golf course which had been lost over time, following the planting of many unsuitable and unsustainable trees. These had created an artificially-treelined look to many of the fairways at Royal Blackheath Golf Club.

"The bunker work, which will be in several phases, will take place over the next few years with disruption to the flow of play kept to a minimum".
Consultant John Nicholson, a veteran of over 400 golf course woodland design and management projects, is responsible for the tree renovation programme at Royal Blackheath GC.

"We are attempting to return the classic English parkland at Royal Blackheath, which is the essential to the spirit of the place" he said. "The work will reveal natural-looking copses and attractive large-specimen trees such as oak, lime and beech, and it will remove some of the smaller ornamental trees which have been planted over the last few decades. The aim is also to return the views and vistas to and from the clubhouse which have been lost to trees.

"I take great pride in having an influence at one of the world's oldest golf clubs" he continued. "The work we are doing at Royal Blackheath, in designing and managing the woodland there, creates the canvas upon which Ken and his course design team can work".

Peter Rishworth, Secretary at Moortown Golf Club, said: "Creative Golf Design worked in tandem with the Greens Committee to implement a ten-year course restoration project at Moortown. Ken and John are great guys, very experienced in treating an old, prestigious golf course with respect, and they produced something fantastic.

They were sympathetic to the wishes of the Committee and members, and worked well within the usual golf club idiosyncrasies. Moortown is now reaping the benefits of what were dramatic changes, particularly as regards to the significant removal of trees and re-establishment of many lost MacKenzie features, which included reinstating over 20 bunkers around the site. We would absolutely work with Creative Golf Design again. If the club makes more alterations, theirs will be the first number I call".

In addition to course improvement projects Creative Golf Design also designs new golf course developments, having worked in many countries throughout Europe. It is currently working on the early stages of projects in Slovakia, Croatia and the Middle East.

Ken Moodie established the firm in 1998, and has developed a network of experienced consultants including BBC TV commentator and five-time Ryder Cup golfer Ken Brown.