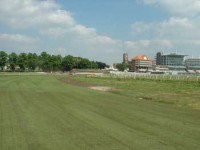 Extensions to York Racecourse are almost complete as the venue prepares to host "Royal Ascot Week" either next year, or in 2006.

Following the decision to move The Gold Cup among other long distance races to York, while Ascot's re-development is completed, three furlongs have been added to the existing Yorkshire track, turning the original horseshoe into a standard 15-furlong circuit.

York racecourse's head groundsman Stuart Arksey says that his worst fear was that the archaeologist employed to investigate the site before construction began, would find something of historical interest that would hold up the work. "Luckily that didn't happen," he confides, "and the basic scheme has gone smoothly."

Preston based Professional Sportsturf Design (PSD), who not only designed the new extension but have contract managed the entire scheme, engaged specialist sports ground constructors Souters Sports Ltd. who arrived on site in early March.

"Once the turf on the new extension was stripped, the top soil was removed and stored," recalls Stuart Arksey. "We wanted to retain the indigenous quality of the course by using it on the new section of racetrack. Work commenced on the formation level, a one in 50 gradient with the lowest point on the inside bend, and when this was complete piped drainage went in at 5 metre centres over the whole 8,000 sq metre area."

"As soon as you disturb the soil profile you close underground fissures and arrest the natural drainage," comments Mike Harbridge of P.S.D. "You've got to get the foundation and the drainage right, and it's got to be consistent with the rest of the course."

Imported sand has been laid to a depth of 150mms above the sub soil and topped by the original topsoil 200 mm deep.

Lindum's L.T. 6 equestrian grade was chosen to turf the new bend following a visit from Stuart Arksey and Mike Harbridge to the company's turf nurseries in Thorganby, just outside York. 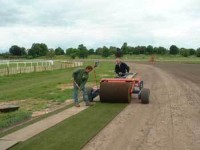 "We were looking for durability and endurance," remembers Harbridge, "and we needed turf grown from a seed mixture which would provide a good cushion for the horses. We liked the appearance of Lindum's sward, it fulfilled our criteria, and we knew that the soil base would be compatible with the root zone at York racecourse."

Just before the new turf was laid, Par 4 Irrigation installed pop up sprinklers, 20 metres apart, all around the course on the inside line. "We wanted the irrigation to be in place before the turf arrived to ensure that we could keep it watered in the early stages," continues Stuart. "All we've got to do now is to keep the thing right which means looking after it with plenty of water at the start. Now that the turf is down we'll seed the margins and perform general maintenance over the summer. Souters will make 3 or 4 cuts of the new grass and we'll install new running rails either in the autumn or over the winter."

York has its own racing calendar from May to October, with a total of 15 days racing.

"We've adopted a different run-out this year to accommodate the new construction," confides Stuart, "and the jockeys have been very good about it."

For further information on Lindum Turf, contact the company on Tel; 01904 448675 or visit their website at www.turf.co.uk