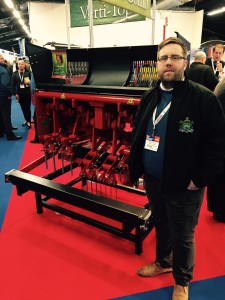 The club has been a fan of Redexim machinery for some time and has become the first to own a 1430 Double Disc Overseeder in the UK.

"Wind is always a key factor at the course and when combined with a dry spell in the summer season, it is vital that water is used in the best possible way. "I don't like watering too often," says Mark, "but when we do I want it to be used in the right way so we aerate every 4 weeks using pencil tines."

Mark purchased a Redexim Verti-Drain 2220 in January 2014 and uses it solely for aeration on the greens, tees, approaches and pathways to ensure the maximum amount of air is introduced into the ground. Mark again, "The biggest benefit we see in doing this is the much improved putting and playing surfaces; better root density and a more sustainable plant able to look after itself - able to reduce your food and water input because the root depth of the plant is much deeper."

A big issue for Mark and his team is time and keeping 'play downtime' to a minimum. The 2220 Verti-Drain is a fast action machine allowing them to aerate all greens in 6½ - 7 hours when it would have taken 3 days in the past.

"This is a big plus for us," says Mark, "but we didn't want to sacrifice depth to have a quicker machine - we can still hit 10 inches with the 2220. It also gives us the option to increase the speed even further by using pencil tines to a depth of 4/5/6 inches. This flexibility has also allowed us to dispense with two old machines. In the summer we're out at four in the morning with the pencil tines and all finished by 11 leaving a clean finish and not getting in the way of any golfers." 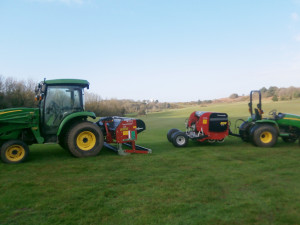 Mark took delivery of a Double Disc 1430 Overseeder at the back end of 2014 - fitted with a wheel kit option to provide the extra weight needed to deal with the hard ground and the 'napping' (where the ground 'naps' together) that has prevented the club overseeding on the fairways in the past.

The seeder arrived quite late in the year but they were still able to get out and do all the fairways with it. Summer season 2015 will see them able to do the fairways twice and the greens five or six times. The 30mm spacing provides a 'no disturbance' factor to golfers to allow quick recovery and leave a lovely finish.

Mark says the combined attributes of the two Redexim products gets the course looking natural and playing the same as it would have been 125 years ago when it first opened.