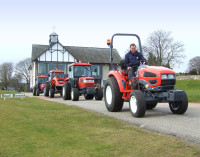 Royal Dornoch Golf Club, ranked 16th in the world and one of the original locations for golf in Scotland, has taken delivery of four Kioti compact tractors from the Scottish Grass Machinery Group following a review of its machinery fleet.

This year the club celebrates 100 years as a 'Royal', having been awarded that title by King Edward VII on 15 June 1906. It has two 18-hole links courses on the shores of the North Sea just 70 miles south of John o' Groats, including the Championship Course, which is visited by many leading Tour Professionals.

The tractors supplied include two DK45C models and a DK50C, which have 45hp and 50hp engines respectively, high-specification air-conditioned cabs, selectable two/four wheel drive, mechanical transmission through 12-speed gearboxes with forward/reverse shuttle and double-acting spool valves. They also have a quick-hitch feature that allows trailers to be attached quickly, and the DK50C has been fitted with a front loader for winter maintenance
work.

The fourth tractor is a 30hp CK30 HST model with hydrostatic transmission and a roll-over protection bar.

The Kiotis will be used for a wide variety of maintenance work on the two courses, including verti-draining, re-seeding, coring and pulling trailers.
Course manager Eion Riddell said he had chosen the tractors because of their overall robustness, high standard specification and the electric lift arm
control. He had also been impressed by the full unconditional two-year warranty provided.