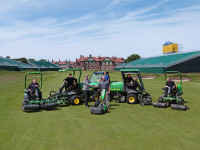 Royal Lytham and St Annes Golf Club hosts The 2012 Open Championship and for head greenkeeper Paul Smith it will be the second time that he has prepared the course for the biggest golf tournament of the year, having been in charge when The Open was last played over the famous Lancashire links course in 2001.

Back then the condition of the course was universally praised, but Paul has found that the degree of expectation and attention to detail required for the 2012 Championship have moved on to yet another level. He is very happy that he can meet, or exceed, these expectations thanks to the generous support of John Deere and its local dealer Balmers Garden Machinery of Burnley, who are the official suppliers of golf course maintenance equipment to the 2012 Open Championship.

Together John Deere and Balmers will be supplying over £500,000 worth of machinery plus two technicians and other staff for the final preparation period and the Championship itself, and Paul believes that he would not be able to carry out a fraction of what he has planned without this level of assistance.

"The support of John Deere and Balmers is key," says Paul. "For the first time we will be mowing fairways in one direction and we will require six fairway mowers to do this. Without the additional machines brought in by John Deere we would not have the time each morning to meet the R&A's minimum maintenance guideline requirements.

"Having machinery that you can rely on can be the difference between everything going smoothly or not. It takes a massive weight off my mind," he adds. Paul is also working closely with the STRI, who carry out testing several times a day during the Championship to identify any variation or change in course condition.

In addition to his own team of 12 greens staff, Paul will have help from another 34 people including greenkeepers from local clubs, a member of staff from each of the six other Open venues and additional greenkeepers from further afield. Add to that the 60-strong BIGGA Open Support Team and there is an army of over 100 staff to ensure that whatever The Open throws at Paul Smith, he will be able to cope.

"Feeding and watering them is probably the most important thing," he says, only half joking. "If we can get that right, and limit the level of sleep deprivation, you have the makings of a successful Open!"

Golf salesman Darren Barker of Balmers is also assisting at his second Open Championship. "As a dealership, we love being involved in The Open," he says. "It is great to feel a part of the team and it was a really good experience last time, especially when there was praise for the quality of the greens."

Paul Smith adds that he is delighted that John Deere and Balmers are so helpful with their time and equipment. "Without them, and the key support that they provide, it wouldn't all come together the way it does."