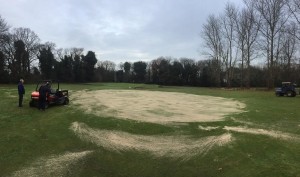 Greenkeepers at Royal Musselburgh Golf Club, which was vandalised last weekend, have been praised for getting the course back on track.

Police are appealing for witnesses after vandals caused extensive damage to the course by driving across its fairways in an act described as 'mindless'.

However, greenkeeping staff. who were initially shocked by the damage to the 10th winter green and fairways. have been working hard to restore the surfaces.

The club, which is the fifth oldest in Scotland, said the damage appeared to have been caused by someone driving a vehicle into the course from the golf club entrance on the B1361 and onto the 10th fairway.

Craig Mackay, club president, said staff and members had been left dismayed by the "mindless vandalism" caused to the course.

He said: "Our greenkeeping staff will be working throughout the coming days to rectify the damage in order that members and guests can continue to enjoy the facilities we provide." 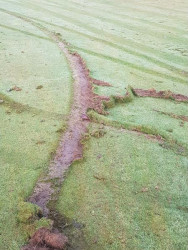 "The golf club is at the heart of the community in Prestonpans where a significant number of the club's members and staff reside and we have received many messages of support from the whole community."

"As a self-funding charity, this has a significant detrimental effect on us and I can only hope that those responsible are traced and dealt with appropriately by the criminal justice system."

The club said the damage, which was initially estimated at around £1,500, had not stopped play, adding the course remained open with only some restrictions on the 10th fairway.

Royal Musselburgh Golf Club owns the Old Club Cup which dates back to 1774 and is the oldest trophy still in competition in golf.

You can read the original article from East Lothian Courier HERE