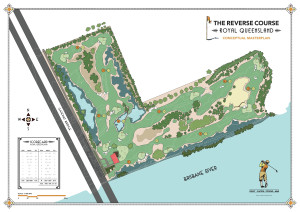 Whilst the concept of 'reversible golf is not new, the plans to utilise a 'vacant' bit of ground at Royal Queensland are.

A reversible course, designed by Ogilvy Clayton Cocking Mead (OCCM), is being seriously considered at RQ to utilise 30 hectares of vacant land that has sat dormant since 2007, when the club completed a major redesign to accommodate the nearby Gateway Bridge.

Several concepts have been considered since then including:

Royal Queensland revealed that Tom Simpson, the British architect who built several great courses in Europe, drew his concept of a small reversible course in his book The Architectural Side of Golf.

Simpson summarised the advantages of a reversible course as:

Certainly there is enough land to build a reversible course with no formalised tees and, according to the club, that would create something unique, varied and fun to play as well as offering 18 quite different holes.

The routing concept of the course has been settled so that the club may commence long lead-in items such as a new water storage dam and access road. The concept of the reversible course and its details will be worked through by the Club and OCCM in the near future. After five years in design, they are hoping to get started soon.

Once completed, the course would not only provide a standard 18-hole option, but also a 9-hole and, interestingly, 4 and 5 hole configurations for those golfers with less time on their hands.