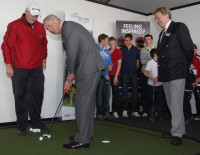 The Prince of Wales on the Huxley putting green at Celtic Manor. (Image courtesy of Andy Redington at Getty Images.)

A Huxley Golf putting green received royal approval when the Prince of Wales stopped to practise his short game during a visit to Celtic Manor.

The green was specially installed by Huxley at the request of the PGA as part of a Game Improvement Centre for visitors attending the recent Ryder Cup.

Prince Charles popped in for a lesson during a public tour of facilities with Cardiff PGA pro Terry Hanson, prompting much coverage in the press.

The green is the second recent PGA installation by Huxley Golf as the Association's official supplier of all-weather golf surfaces.

The premier manufacturer also delivered a new Huxley Modular Green to the PGA National Training Academy at The Belfry.

Huxley Golf Sales Manager Paul Chester, who led the installation team at both locations, said: "Huxley all-weather greens and tees are renowned for their superb playing surfaces and that's why they're used at Celtic Manor Resort's own practice facility as well as the PGA's National Training Academy and by many of the top golfers and golf courses."

The PGA Game Improvement Centre at Celtic Manor proved one of the most popular attractions at the Ryder Cup with golfers of all ages and abilities eager to receive some expert advice on their techniques.

Gareth Lewis, the PGA's manager of golf education in Wales, said: "The Game Improvement Centre was a huge success and I'd like to thank both the team of PGA professionals for their effort and also the PGA official suppliers and partners for helping make it possible."