As a loyal Toro user for approximately 40 years, Royal St David's Golf Club has yet again made a considerable investment in new Toro equipment, as well as an irrigation scheme planned for operation later this year. 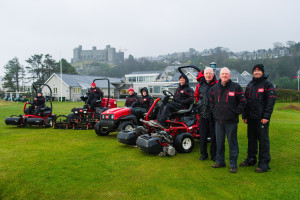 Nationally and internationally renowned, the club is one of Wales' premier golf courses, rated within the top 50 golf courses in the UK. This is thanks, in part, to links manager Rhys Butler, who continuously strives to keep the course looking and playing at its best year round.

As such, when the time came for Rhys to upgrade his fleet, he thoroughly researched what the current market has to offer outside of Toro to ensure the club deploys the very best equipment.

"There are tremendous demands upon us to have high standards of presentation but this can only be achieved if the tools we use to do the job are of the required standard," he says. "We evaluated comparative machinery in all key areas to include performance, maintenance, ease of use and safety."

Having trialed competitive machines, however, he concluded that Toro equipment ticked all the right boxes and, in his opinion, was head and shoulders above the rest.

Now committed to a new five-year Total Solutions package with Lely UK, exclusive UK Toro distributors, Rhys adds that support and back-up from his local Toro dealer, Major Owen, who have a proven track record with the club, also helped to seal the deal.

Among the mixed fleet purchased by the club, most replaced existing Toro kit, but changes included the adoption of an all-electric Workman MDE and hybrid Greensmaster 3420. The latter is sharing mowing duties with a new Greensmaster 3250-D.

Commenting on why he favours Toro equipment, Rhys lists performance, back up, ease of maintenance and ease of operation, and adds that safety and environmental impact are also high on his list of priorities. "If golf is to have a future it needs to look after the environment and respect those who maintain courses. As Toro equipment has evolved I have seen it become quieter, more fuel-efficient and more productive and at the same time take both the operator and environment into consideration."

Working hard to fit in with the environment has led the club to becoming Golf Environment Awards 2015 Finalists.

"I think hybrid and electric power has a great future in golf," adds Rhys. "We need to look at fuel efficiency and reducing fuel use generally. So far I have been impressed by the electric Workman and the Hybrid 3420 as I think they will both deliver reduced operating costs over time."