The Royal St George's Golf Club, Sandwich, provided a true challenge to the world's best golfers at the 2003 Open Championship in July. The course, superbly prepared by head Greenkeeper Neil Metcalf and his hard working staff, played as fast and hard as a traditional links course should, and attracted widespread praise for its high quality, testing conditions.

Open champion Ben Curtis will perhaps have appreciated more than most the work done by Neil and his team, as his father is a golf 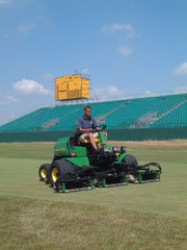 This completed a hat-trick of Opens for John Deere, which has now supplied course maintenance equipment for three consecutive championships, in 2001 at Royal Lytham & St Annes, in 2002 at Muirfield and now again in 2003 at Royal St George's.

Godfreys delivered its first machine to the club last October, a 2500 triplex greens mower. Three further 2500s, a 3235B fairway mower equipped with fairway tender conditioners, a 2653A mower for tees & bunker surrounds and two compact tractors, a 4410 ePowrReverser and a 4700 with front loader, have since been added to the year round fleet.

Following extensive trials, and John Deere's performance at other major championships, the club was impressed by the quality and reliability of the machines, as well as the support service offered.

Neil manages a permanent Greenkeeping staff of 10, including deputy head Greenkeeper Graham Royden, with five more helping the team during the Open. Changing weather patterns over the last five or six years mean that grass growth is a lot more vigorous than in the past, when the course used to manage with only six staff.

"We have about four square miles of golf course to maintain, with easily 30ha of grass to cut, and quite a bit of land outside the main course," he says. "We are also in an English Nature special area of conservation, with the highest population of lizard orchids in England, so our maintenance schedule has to take account of this.

"We have to work to a consistently high standard to meet the expectations of visitors and members, particularly during an Open year when the course is so much under the spotlight. It takes a lot to keep up with the grass growth, so staff and equipment work that much harder, and the last thing anyone needs is a machine sitting in the shed waiting for repairs. They must be reliable and easy to 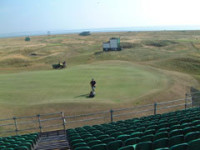 "We have been impressed most by the reliability of the John Deere machines, their high quality of cut and their adaptability working over our undulating fairways and greens," adds Neil. "The Open course ended up just what we hoped it would be, a hard, fast running links and a true test of golfing ability."

The pedigree of the Open at Royal St George's, which was the first club outside Scotland to host the championship in 1894, is unquestioned. John Deere's pedigree as a supplier of course maintenance equipment to some of the world's most famous golf courses is now becoming just as well established.