"WE might just have a day of reckoning," Royal Sydney course superintendent John Odell tells his greenkeeping staff as he briefs them before round two of the Australian Open.


He's talking in a Biblical sense.

The weather forecast is downright unpleasant, drawing comparisons with the awful squall that lashed the early starters in the opening round of the 2006 tournament at the storied links.

"We've got very bad weather forecast: rain strengthening this morning and intensifying later. They're talking of more than 100mm of rain with wind over 50km/h. The morning field may get through, but the afternoon starters might not finish.

""It's an honour to host the Open, but first and foremost we prepare the club for our members." - John Odell " 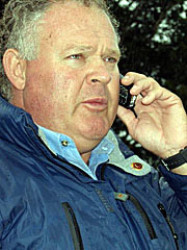 "We'll definitely need people on squeegees later and we might be striking bedlam from midday."

This assignment, to go behind the scenes at Royal Sydney's Turf Care Facility, to see how the staff present the course hosting the 2008 Australian Open, seemed so gentle when it was pitched.

It seemed better still when I arrived at 4.30am to meet the greenkeeping staff at the facility, the smell of grass fresh and sugar-sweet in the pre-dawn darkness. But I hadn't heard the forecast. And then I saw the radar image on one of the guy's iPhone showing all kinds of blue and purple.

"I can't remember seeing a system like this," Odell says later as he looks at the Australian Bureau of Meteorology website. At least blue and purple means shades of light rain. Yellow, orange, red and black, heavier rain, are more cause for concern. I think I hear Odell say "perfect storm" and I'm glad I'm at Royal Sydney Golf Club not Royal Sydney Yacht Squadron.

Odell sets out to meet to meet tournament director Trevor Herden on the 4th hole, to establish whether the greens will be mowed. They were cut the night before - all 18 plus practice and chipping greens cut with heavy ride-on mowers over three hours - but grass lives and breathes and grows, and the ball does not roll as true, as smoothly, if the greens are not manicured again in the morning.
Putting

Herden and Odell go though the process on three greens, making putts to test the roll, before a decision to mow, or not to mow, is reached. The decision will be made to preserve the integrity of the course, and of the tournament. The forecast wind, rather than the rain, is the key factor in the decision-making process.

"We don't want to see a situation where the ball starts moving involuntarily," Odell says. "The ball's rolling out nicely," Herden says. "I don't think we need to cut them."

Odell, with 30 years' experience as a course superintendent, is preparing an Australian Open course for the fifth time. And he has become one of the most respected members of the greenkeeping fraternity since his first Open layout, in 1988, was lauded by Greg Norman as "the best prepared of all the tournament venues (he had experienced)". His opinion is valued highly.

"I think we can get away with it," says Odell, who would like to cut the greens as "a whisker of grass has grown overnight".

And so the decision is made.

"I can't remember the greens not being cut and rolled on the morning of a round," Odell says later. "They'll be a little slower today. But I respect Trevor's judgment and his responsibilities to the tournament."

And the judgment was vindicated almost as soon as it was made. Rain started falling almost immediately and it never stopped, falling steadily and constantly from well before the early starters teed off, and "intensifying" as the breeze picked up through the afternoon.

"Let's go home, then," one of the staff quips back as the Turf Care Facility. He's joking, of course, but the greenkeeping staff, in truth, are doing little today but fine-tuning the layout, for much of the hard preparation work has already been done.

The job of preparing the course is a 12-month process, and Open-specific tasks have been undertaken since September 1. The task: to present the layout in nothing short of perfect condition by using intimate knowledge of environmental science, greenkeeping, horticulture and landscaping.

"It's an honour to host the Open, but first and foremost we prepare the club for our members," Odell says. "Everything we do, every day of every month, is done very, very well. We have a terrific team who make sure they do their work to a very high standard and treat their work as a signature."

Odell introduces me to head mechanic Ian Widocks, an expat Englishman who has worked at Royal Sydney for five years after seeking a different challenge from his previous employment with buses. 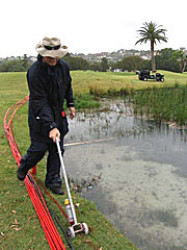 "This is the nuts and bolts of the operation," Odell says of the garage and workshops where the multi-million-dollar investment in specialised machinery is housed and maintained. "Without Ian, nothing can be done."

Widocks illustrates the sharpness of a reel by gently running a piece of paper to the recently machined blades. The paper slices precisely, surgically. "We're constantly grinding. The leaf quality depends on the frequency of cut. It's like if you are cut with a razorblade rather than a blunt instrument; the flesh heels better and more quickly if cut with the razorblade.
Royal Sydney: Take a tour around the course with Brett Ogle
"We've been cutting every day for 10 days. I was out there the other day and I got down on my knees. The fairways were pure. Sharp. Just like a carpet."

It's no surprise to learn that the blades slice dollar coins every bit as easily as paper, or that the course is scoured four times with metal detectors after the circus leaves town, in an attempt to reduce the potential blunting damage that dollar coins, drill bits and other deposits can cause the precision turfcare machinery.

"It's all about preventive maintenance," Widocks says.

Back on the course, I discover the absolute amount of work that also goes into preparing and presenting the bunkers.

"Bunker management is a full-time job," Odell says. "We have four people taking up to eight hours a day redistributing the sand, maintaining the faces, fixing the walk-ins, keeping them playable and presentable. It's a constant battle.

Odell is in constant contact with his staff as we put the flagsticks in the cups cut the previous night, and his two two-way radios (one UHF and one VHF) are a-crackle. He returns from placing the third flag and gets straight on the radio.

"Can you get to the 3rd green," he says. "There's a big dollop of batshit hit by the flag."

Odell explains that the flying foxes eat figs, which he says emerge from their system "like chewing gum".

I learn later that the "chewing gum" has been cleaned with "a cloth and water".

By 9am, the morning's preparations have been completed. It's time to return to the Turf Care Facility for bacon and eggs rolls. Six of the staff will remain on duty through the day, and they find plenty of work from 2:40pm clearing surface water from the course before play is suspended half an hour later because of bad weather.

Another team arrived at about 4pm to conduct remedial work on the course, with the biggest task being to commence filling divots and repairing the bunkers. Odell said in a phone call at 920pm, after leaving the course "like a drowned rat", that his team had volunteered to stay back also to remove the tee markers and the flags while also removing any number of fallen branches and filling in bog holes that had developed on the fairways.

Odell also went around the course with Trevor Herden to decide the pin positions for Saturday.

"Things have to be spot on," Odell says of the positions.

And Odell returned to the Bureau of Meteorology website, not for the first time, hoping the forecast for Saturday - "Fine. Mostly sunny. Northwest winds becoming fresh to strong during the day. Min: 18. Max: 34." - matched the accuracy of Friday's.

"It's been a tough day today."