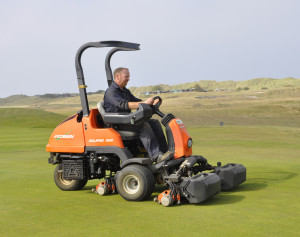 The tidal flooding on December 5 last winter left £1 million damage in its wake including extensive damage at the clubhouse; the kitchen, Men's changing room and Pro Shop were all seriously affected, but the club lost their entire machinery fleet worth in excess of £600,000.

"The response from the industry in the area was fantastic," said Gavin Playford, "everyone rallied around for us and the three major manufacturers, through their local dealers, were very supportive. With their support of loan equipment we were up and running very quickly after such a catastrophic event.

"The insurance company were also very professional and when I told them we had over five feet of water in the maintenance shed, they sent a surveyor out quickly and approved a list of replacement machinery at the double.

"We had the hybrid Jacobsen Eclipse in our planned replacement schedule as I'd had it on a three-day demo about 18 months ago, but with the approval of the insurers we were able to get it as part of the replacement package. 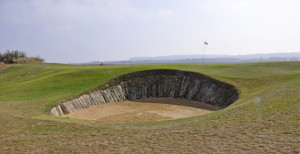 "I really like the machine's ability to change the frequency of cut. We have found that the 2.4 setting (416 cuts per metre) is right for us. In my opinion, the finish is as good as double cutting but in a single pass. It's very easy to work on; the swing out centre unit is a very good feature and the maintenance information on the display screen leaves you in no doubt about what servicing needs to be done, and when. Yes, a really well thought through piece of design."

Gavin joined the club straight from school back in 1986 and 28 years later is responsible for a team of five full time greenkeepers including a greenkeeper/mechanic. He runs a mixed fleet of turf maintenance machinery preferring to purchase the equipment that does the job for him on his course. Royal West Norfolk was founded in 1892 and is unusual in that its 'Royal' status was conferred at the outset, when the Prince of Wales - later to become King Edward VII - accepted an invitation to become the club's patron. One of the finest links courses in the area and enjoying an ancient rivalry with nearby Hunstanton Golf Club, it has another unique feature in that the clubhouse is not accessible at high tide as the North Sea sweeps in around the nearby marshland and cuts it off.