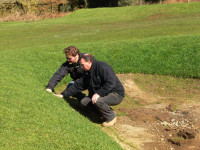 RTF turf, known for its wear tolerance, deep rooting ability (up to 1.5 metres), and capacity to withstand shade, drought and salt, has been utilised on one of the most exposed golf courses in South Wales.

Neath Golf Club, in West Glamorgan near Swansea boasts an 18-hole mountain and heathland course rising at its highest point to 220 metres above sea level. "On a clear day you can see the Brecon Beacons and right across to the Bristol Channel," says Steve Chappell, who has been Head Greenkeeper since 2004. "This course was designed by James Braid and built in 1934. His design had grass faced bunkers, but these were changed to sand faced about 10 years ago."

In 2005, Steve decided to re-build the bunkers returning to the original grass faced design. "The problem with sand faced bunkers, especially on a course like this is that they suffer from sand wash-off and the soil underneath becomes exposed. Once that happens the soil contaminates the sand in the bottom of the bunkers, which means that it continually needs to be changed. The sides of sand faced bunkers are also eroded by strong winds," he explains.

Steve with his five staff built four new bunkers that year, but struggled to find a turf with a grass variety that could stand up to the weather conditions. "We tried traditional fescues," he remembers "but they didn't have the wear tolerance needed in this situation." Having met Martyn David, MD of Premier Turf, Lindum's South Wales distributor, Steve decided to try the then relatively new RTF, and it worked.

Following this success, last autumn Neath's greenstaff began to re-build eight more bunkers, (the course has a total of 50). "They did all the construction themselves," Martyn David remembers "and put the RTF turf down in December."

"It's done very well," says Steve Chappell.. "Although having grass faced bunkers means that we've increased the amount of fly mowing during the growing season, the presentation of the course and the quality of play has vastly improved. We've now got bank stabilisation and great definition between the RTF and the close cut surrounds turf."

RTF turf has also been used on some of the walkway areas at Neath and as pathway edging, exhibiting its special abilities to recover after wear.