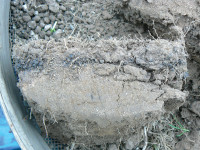 ubber crumb top dressing has been used for many years on a wide variety of sports surfaces. The crumb has been found to have some benefits in improving turf resiliency and wear tolerance, but the main function of the crumb is for protection.

The crown of the grass plant is susceptible to damage; this can be caused by direct injury, boot studs, spikes or shoe soles and also as an indirect cause from abrasion, caused by sand topdressing damaging the crown, again through the interaction of the footwear to the surface.

The crown of the plant is the area from where the soft grass tissue, (roots, stolons, rhizomes and leaves) is regenerated. Damage to this part of the grass plant can directly impact on the grass's ability for growth and regeneration.

The application of the rubber crumb material is a process which should be familiar to all greenkeepers and groundsmen and comprises five steps:
• Hollow tine the area
• Spread the rubber crumb on the surface
• Brush in
• Overseed and allow to grow
• Repeat application after 3 weeks until desired rate is applied.

As well as this movement, rubber is susceptible to ageing; the structure is gradually decomposed due to the UV radiation and the oxidisation process. One side effect of this decomposition is the release of zinc, and several studies have reported on the higher levels of zinc in both the soil and ground water following the application of rubber crumb. It was also found that, at higher zinc levels, reduced growth was observed when measured by clipping yield, although this may possibly be negated, as it is possible to wash fine particles from the crumb rubber and greatly reduce the release of zinc.

The application amounts are similar to a typical topdressing programme of between 4-6 kg/m2/year. The difference is, of course, in the nature of the material being applied. It may be considered one thing to apply a 6kg/m2 dressing of sandy material and quite another to apply 6kg/m2 of rubber crumb every two years or so as is recommended.

In 2000 a study at Askham Bryan College into turf wear tolerance using various soil amendments was carried out on the football pitch. Trial plots were established in the 18 yard box. Five of these plots were incorporated with rubber crumb, using the previously mentioned guidelines.

A 2-6mm diameter rubber crumb was incorporated into the existing rootzone, (the pitch is constructed from native soil, sandy loam, with grid drainage at 5m centres), at an initial rate of 3.2 kg/m2 followed, six weeks later, with an application of 1.8kg/m2 applied as a topdressing. The total applied was therefore 5kg/m2. 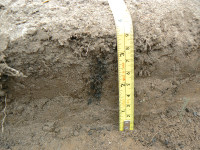 In the intervening six years since the trial plots were established the pitch has been subject to approximately 260 matches and is also used as a training facility twice per week during the football season. This would equate to approximately 644 games.

Figure 1 shows a section taken from the first 100mm depth and the rubber crumb can be seen in the top 50mm of the soil. This would prove to be where the majority of the crumb was located.

All the arisings were air dried over a period of time and the soil was then passed in stages through sieves from 6mm down to 0.5mm and, at each stage, the rubber particulate removed.

This was then weighed and the total figure allowed for a comparison to be made to the original application rate.

While every effort was taken to recover all of the rubber crumb particulate, some of the "missing" material has possibly broken down to a sieve size smaller than 0.5mm and was not recoverable, whilst a percentage may well have moved deeper in to the soil profile although, as stated earlier, this would be unlikely. It would seem the loss due to degradation could account for the difference.

The new crumb was sieved in the same way and was found to have an overall greater particle size, approximately 65% of the particles being retained by a 3mm sieve, compared to the old crumb where more than 90% were smaller than 2mm.

While the crumb remains in the soil there may well be benefits associated with rooting structure, however, given that the crumb is designed to protect the upper parts of the grass plant it would seem that this benefit is no longer applicable and, therefore, the recommendations that dressings should be carried out every two years if protection is the aim of the turf grass manager would be valid.

However, given the slow breakdown of the particulate it would seem that repeated applications over a number of years would result in a steady accumulation of the rubber crumb in the top 100mm of the soil. Further study would be required to investigate the soils potential for absorption of the rubber crumb, the rate of degradation and the effects of the ball on a surface which may consist of a large amount of rubber particles.