by Peter Britton
in Synthetics, Industry News, Rugby, and Football
on 03 May 2017 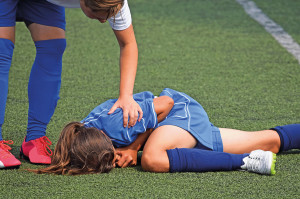 It was regarded as a 'must read' by certain sectors of our industry, not least the Institute of Groundsmanship (IOG), when the European Chemicals Agency (ECHA) delivered their evaluation on the rubber crumb infill used in 3G turf pitches at the end of February.

Why a must read? Because the report stated that "recycled rubber infill causes a very low level of concern" and was, therefore, deemed as a green light for the industry to continue to use rubber crumb as an infill in all new installations.

The report stated: ECHA has found no reason to advise people against playing sports on synthetic turf containing recycled rubber granules as infill material. This advice is based on ECHA's evaluation that there is a very low level of concern from exposure to substances found in the granules. This is based on the current evidence available. However, due to the uncertainties, ECHA makes several recommendations to ensure that any remaining concerns are eliminated.

ECHA has evaluated the human health risks from substances found in recycled rubber granules that are used as an infill material in synthetic turf, such as that used in outdoor and indoor football fields.

By 2020, it is estimated that 21,000 full size pitches and about 72,000 mini-pitches will exist in the EU. Rubber granules used as an infill material are mainly produced from end-of-life tyres (ELT) and the industry has informed ECHA that most of this infill material is made from EU-produced tyres. The quantity of tyres and recycled rubber granules imported into the EU is reported to be small. However, ECHA cannot verify this information from an independent source.

ECHA has investigated the risks to children playing football and other sports on synthetic sports fields (including goalkeepers), adults playing professional sports and workers installing or maintaining the fields and has considered exposure to rubber granules by skin contact, ingestion and inhalation of substances evaporating from the granules, as well as dust formed by the granules themselves.

ECHA therefore concludes that there is, at most, a very low level of concern from exposure to recycled rubber granules:

Sounds positive, doesn't it? That is, until you read the list of 'uncertainties' identified in the ECHA's evaluation: 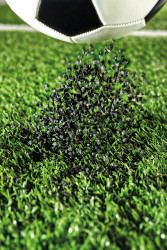 • The conclusions are based on available studies from almost 10 Member States.

• More than 100 fields (infill material already in use) and around 50 samples of new recycled rubber granules were studied.

Are they representative numbers given the importance of the concerns?

• While ECHA was unable to find any particular bias in the studies, it is uncertain to what extent they are representative.

If there are uncertainties, then the report is not conclusive.

• There are still some knowledge gaps as regards to the substances present and their concentrations in the recycled rubber granules.

There should be no knowledge gaps.

• Some imported tyres entering the EU, or other rubber material with unknown composition, can be converted at the end of their lifecycle into rubber granules and may have different concentrations of substances than those in the above mentioned studies. Indeed, rubber granules themselves may be imported, and the composition of such granules is not known.

Then find out, surely.

• The combined effects of all the substances in rubber granules are not known and very difficult to assess. However, this uncertainty is not considered to affect the main conclusions of this evaluation.

• Some of the input values used in the risk assessment are assumptions. In this evaluation, the assumed values were conservative (for example such as how many granules children would swallow when playing). This approach reduced the uncertainty of this evaluation.

When making such a bold statement such as "recycled rubber infill causes a very low level of concern" should assumptions even be considered?

The report is summarised thus: "rubber granules used in artificial turf continue to be investigated in the EU and elsewhere. For example, the US Environmental Protection Agency (EPA) is expected to produce its report on 'Recycled Tire Crumb Used on Playing Fields' in late 2017. The conclusions of ECHA's evaluation will need to be reviewed when this report becomes available.

This last statement suggests that the ECHA's evaluation is somewhat premature, given that the EPA is some way off reaching their conclusions.

Furthermore, the EPA clearly state that "Studies to date have not shown an elevated health risk from playing on fields with tire crumb rubber, but these studies have limitations and do not comprehensively evaluate the concerns about health risks from exposure to tire crumb rubber."

So, rather than 'publish and be damned', the EPA has taken the sensible route of involving other agencies such as the Centers for Disease Control and Prevention/Agency for Toxic Substances and Disease Registry (CDC/ATSDR) and the Consumer Product Safety Commission (CPSC).

CPSC has released a Federal Research Action Plan on Recycled Tire Crumb Used on Playing Fields and Playgrounds (FRAP). The purpose of the FRAP is to study key questions concerning the potential for human exposure resulting from the use of tire crumb rubber in playing fields and playgrounds. This kind of information is important for any follow up evaluation of risk that might be performed.

It is fair to say that the EPA may well reach similar conclusions to the ECHA; that is, as yet, an unknown. But at least they, and the other US agencies, are conductiong their own research, rather than gathering information from already published data, as the ECHA has done.

That method surely leads to cherry picking the research that supports the argument. And it certainly would not be difficult to find 'evidence and theories' that support the counter argument.

So, given that this 'must read' document has made its way into the public domain, what recommendations for rubber crumb infill do the ECHA offer?

1. Consider changes to the REACH Regulation to ensure that rubber granules are only supplied with very low concentrations of PAHs and other relevant hazardous substances.

2. Owners and operators of existing (outdoor and indoor) fields should measure the concentrations of PAHs and other substances in the rubber granules used in their fields and make this information available to interested parties in an understandable manner.

3. Producers of rubber granules and their interest organisations should develop guidance to help all manufacturers and importers of (recycled) rubber infill test their material.

4. European sports and football associations and clubs should work with the relevant producers to ensure that information related to the safety of rubber granules in synthetic turfs is communicated in a manner understandable to the players and the general public.

In addition, ECHA recommends that players using the synthetic pitches should take basic hygiene measures after playing on artificial turf containing recycled rubber granules. For example, they should always wash their hands after playing on the field and before eating, quickly clean any cuts or scrapes, take off their shoes/cleats, sports equipment and soiled uniforms outside to prevent tracking crumb rubber into the house, and any players who accidentally get rubber in their mouths should not swallow it.

Given that the ECHA consider the product to be safe, the list of conclusions and recommendations seem inordinately long.

Surely they would have been better to wait for the EPA's findings later this year rather than fudge the issue.

As I have said all along, rubber crumb may well prove to be a safe and viable product to use as an infill on 3G surfaces, around play areas and such like, but please can we have a definitive statement to that effect, not some half-baked evaluation designed to placate those on the other side of the debate.