0 Rugby Lions RFC heading back to the big time?

Once playing at the highest echelons of their sport, Rugby Lions RFC have, in recent years, hit on leaner times and steadily dropped down the leagues.

Now, a group of former players and other ex professionals are embarking on an ambitious five year plan to bring Premiership rugby to the home town of the sport.

Our editor catches up with an old adversary, and discovers that the grounds are in 'pretty' good hands in the shape of Sue Lacey, one of just a handful of women at the 'coalface' of the turfcare industry

With a home ground in Webb Ellis Road, in the Warwickshire town of Rugby, the Lions can rightly claim to be a part of the sport's illustrious history. In truth, the playing fields of the nearby Rugby School is where the game originated when, in 1823, a young William Webb Ellis cantered off with a football under his arm. The rest, as they say, is the stuff of legend. However, the Rugby Lions club, which was formed some fifty years later, is acknowledged as one of the oldest clubs in the country.

Typical of many clubs, they have had their highs and lows, at one time having been at the very top level, in 1990, when they were promoted to Courage League Division One. When the game went 'professional' in 1997, it affected many clubs' finances, Rugby Lions amongst them, and the club began falling back down the leagues.

A further relegation in 2010-11 prompted a former player, Michael Aland, to step in and purchase the club. Michael's vision and ambition is to put the club firmly back where he believes it belongs, contesting for honours and success in top professional rugby. The aim is to guide the club back up the leagues, with the Premiership the ultimate goal.

"It will take at least five years to have everything in place in terms of leadership, facilities and academy status," explains Michael. "We have already recruited several highly experienced players and coaches, including former England player, Neil Back as Head Coach, along with Ben Gollings, an England Rugby Sevens international. Andy Key, another former top class player - most notably with Leicester Tigers - has been appointed as Chief Executive Officer."

"Andy has an outstanding rugby and sporting pedigree," states Michael. "His father was a Tigers player, whilst his two brothers were professional footballers. As well as playing for the Tigers for a total of thirteen years, Andy later became their full-time General Operations Manager, so I'm delighted to have him on board."

I was looking forward to meeting Andy, as I fondly remember turning out against him back in 1978, when my then club, Birmingham RFC, played Leicester Tigers at Welford Road - I've still got the match programme ... and bruises! We only lost 36-12, which was not a bad result considering how many international players the Tigers had in their line-up.

I caught up with Andy at the Lions ground to hear, firsthand, what plans the new regime have for the club.

Currently, the club play at the Webb Ellis Road ground, and lease a second pitch from the cricket club adjacent the ground. "The club has been holding talks to secure funding, and looking at what land is available in the town to develop the facilities further," enthuses Andy. 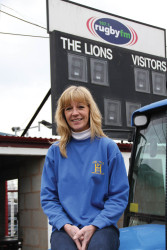 "We have a fantastic opportunity to build a viable, modern rugby facility that can serve the community in more ways than one. We've given ourselves a timescale of five years to set up and bring to the table a brand new rugby club facility, offering a 30,000 seated stadium, with adjacent training facilities. The new complex may also, subject to planning permission, offer hotel and conference facilities, enabling us to bring in additional income. We are currently seeking promotion to National North Two and, if the success continues, hope to become a Premiership club in a few years time. The success of one is dependant on the other."

Both pitches at Webb Ellis Road are maintained by Sue Lacey, a job she has undertaken for several years.

One of only a handful of female grounds managers in the country, Sue has been looking after the pitches full-time for the past three years, carrying on the good work of her late husband, Phil, who himself played for the club. She still retains the name of his business, Phil Hall Ground Services.

"I used to run my own restaurant and coffee house in the town, called 'Brookes', but sold it twelve years ago before the birth of my youngest son," explained Sue.
"I wanted a complete career change, so started helping Phil with his grounds maintenance, working at local schools as well as the Rugby Lions. I started working on a part-time basis approximately ten years ago, and then became full-time in 2005."

"Phil taught me how to drive a tractor, operate gang mowers, mark out football and rugby pitches, athletics tracks, turf maintenance, cricket preparation; in fact, everything about the work, and even a bit of mechanics!"

"I've had a lot of support and advice from James Mead, Rugby School's Grounds Manager, and his help has been very valuable to me. I would go as far as to say I couldn't have done it without him!"

"Three years on, I feel I have proved to myself, and others, that I can do the job. It's very challenging and hard work, but rewarding at the same time. I think it helps having a passion about doing a job well, I look back at a field I have just finished cutting, all nicely striped, and get a great feeling of satisfaction and pride."

"Keith Kent, Head Groundsman of Twickenham RFU said, in a recent report, that I know what I'm doing and have a 'feel' for the work involved. It is hard demanding work, and I do it mostly on my own, however, I now have some part time help from a very good friend of mine, Paul Baker, who is a fireman and helps me two days a week in between shifts."

Over the years, She has built up a substantial amount of equipment and machinery to help carry out her schedule. These include Hayter and Etesia ride on mowers, a New Holland TN75 tractor, a Trimax Stealth Procut rotary deck, a Sisis slit tine aerator, a ride on 'trike' spray line marker and an array of pedestrian equipment - mowers, strimmers, hedgecutters etc. She also has an Auto-roller for rolling the cricket squares.

Sue carries out all the maintenance operations at the rugby club on her own. "I cut the pitches weekly with the Trimax, maintaining a height of cut between 40-60mm, depending on conditions. I mark out weekly using the trike. Feeding regimes are dictated by budgets but, in general, the main pitch gets fed during end of season renovations and a couple of times during the growing season."

"I like to spike the pitches as often as I can, when conditions allow. This is an important operation for rugby pitches. End of season renovations are, again, dictated by budgets. At the moment they are fairly basic, revolving around deep aeration, topdressing (50 tonnes of sand) and overseeding."

The club only use the main pitch for matches and captain's training runs (pre-match warm-ups). General training for all teams takes place on a floodlit training pitch located on the cricket outfield.

Andy interjects; "When we get the new stadium, we would still retain the current facilities, earmarking them for use by the youth rugby sections. We will also be investing in building additional facilities on the current site, aiming to improve the hospitality facilities and changing room areas."

"Our vision for the club is to build up a strong academy ethos, attracting players to come and join the club and use the refurbished club facilities. Plans for this have been approved, with work starting this summer. We have been consulting with David Powell, the Head Groundsman at Northampton Rugby Club, about upgrading the pitch at the Webb Ellis Road ground."

As soon as the 2011/12 season finishes, the following work is planned to improve the playing surface. Glyphosate will be applied to kill of the vegetation, and the pitch will then be fraise mown to remove the top 25mm of thatch, then earthquaked, power harrowed, re-levelled, topdressed with sand and overseeded.

David was keen to help as he, also, was a former player before he moved to Northampton, where he served the club with distinction both on and off the field. He played 370 times for the club, was a British lion in 1968 and, since his retirement, has looked after the Saints rugby pitches.

There are also plans to improve the irrigation system to ensure the pitch can be watered more efficiently. The club will then look to increase the amount of maintenance work carried out on the pitch to ensure it meets the demands of the teams.

Andy is hugely optimistic about the future of the club. At the time of writing, they are still unbeaten, and currently sit top of National League Three Midlands, with promotion to the next level on the cards.

He has already seen the wealth of talent coming through the club's system after watching a number of academy stars shine for the Under 16s.

If everything goes to plan, the Lions look to have a great future. Next season looks even more promising, with a new pitch and improved changing and gym facilities becoming available.

It would seem that Sue might be spending even more time at the Webb Ellis Road ground to ensure the new pitch delivers the expectations of the club. She is looking forward to the challenge, and confident she can produce a much improved playing surface for her clients.

The town of Rugby certainly seems a fitting place to be hosting Premiership rugby.