Many of the modern stadiums cater for more than one sport these days, including major venues such as Old Trafford and the Millennium Stadium.

It would be fair to say that the longer length posts are awkward and cumbersome to put up, requiring either a crane, cherry picker or a group of hefty lads with strong nerves.

Thank God though that somebody invented aluminium posts, because putting up heavy steel posts is even more daunting.

Well in years gone by, without the aid of a machine, I'd maybe have four or five guys ready to walk each post up, i.e. arms above heads holding the post and literally walking towards the base, pushing the post up vertically. To do this required another man trapping the base of the post underfoot or using a tractor wheel or concrete block as a stopper.

Keeping a 35' plus post straight at the same time as walking it up to a vertical position needed to be a well rehearsed operation. The second that the post started to sway or twist away meant either trying to hold it tight or running for cover as the post came crashing back down to earth. Obviously assuming there was no personal injury, the post may well have become bent or buckled in the process.

This year, whilst working at the Millennium Stadium, we used two different methods. The first was the team of four lads, all grabbing the tip of the post and walking it up. Fortunately the posts were attached to hinged sockets, so we didn't need to worry about the base of the post moving. However on two occasions for whatever reason we were forced to jump out of the way as we lost control of the post.

I would urge all Groundsmen to modify their posts to accommodate a hinged socket system; this allows the base to be fixed securely while moving the post up or down. 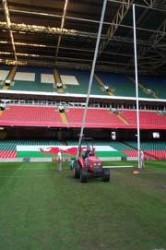 Having spent a couple of months using these methods again on a regular basis, I decided that we needed a tool that could sit on the back of a tractor and lift the post effortlessly.

I spoke to Gareth Rees at Inturf (who was my employer) and he knew a local engineer who did most of his machine repairs and welding. Within a couple of weeks he had built a framed system that sat on the three-point linkage of the tractor.

Following the Konica Minolta Cup Final (Welsh RFU Cup), we tried the new apparatus and one man was able, sitting on the tractor, to erect and bring down each rugby post effortlessly. Most importantly this was done safely.

Although this was a prototype, we felt that we had something that would be of huge benefit to clubs, educational establishments and local authorities. So perhaps, if you are interested, then let me know and if there is enough interest we could manufacture a few more.

Please e-mail me at dave@pitchcare.com to express an interest.