by Dr Kate Entwistle
in Consultancy
on 29 Nov 2006 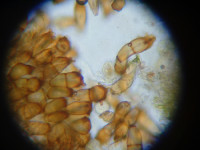 Rust is a collective term that is commonly used to describe a group of turfgrass diseases, each of which is characterised by the prolific production of small, rust-coloured spores. Where they develop, rust infections can cause a severely detrimental effect to the visual quality of the sward, can reduce the strength of the infected plant making it more susceptible to further infection and can significantly add to the time spent in cleaning down turfgrass mowers and other mechanical equipment. However, unlike many of the fungi that cause disease on turfgrasses, rust-causing fungi do not directly kill the host plant.

Rust diseases are caused by any one of a number of fungi that need to live on a living host and therefore they only take from the plant what they need to complete their life cycle. In severe outbreaks, this may not appear to be the case but plants invariably recover from even the most severe infection. Different rust causing fungi vary in their life cycles, producing up to five different spore types. All spore types can be produced on the same host plant but many rust-causing fungi complete their life cycle by living for some of their time on an unrelated plant host. 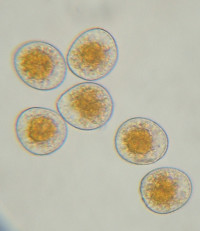 Because of the diversity that exists between rust causing fungi, it is difficult to provide a general life cycle for them. However, the conditions that tend to favour these diseases are fairly standard. Plants that are showing reduced vigour due to low nutrient input and drought stress are more likely to develop rust infections. Leaf wetness is important if the fungus is to infect and therefore extended periods of dew will allow rapid disease development.

Following initial infection, the symptoms show as yellow spots or flecks on the leaf and stem. These enlarge and elongate, eventually producing cushions or blisters on the affected plat tissues which, when mature, will split open releasing their spores on to the surface.

Warm, damp weather is ideal for the development of rust diseases and the damage can be all the more severe on drought-stressed, nutrient limited turf. Management practices include the application of sufficient water and nutrient to avoid either drought or nutrient stress. Reducing the period of leaf wetness will also reduce the development of disease.

The mowing height should not be lower than recommended for the grass type and infected leaf tissues should be removed after mowing to reduce the inoculum level in the turf. Increased air movement and decreased shading will also minimise the severity of rust infections. As with many turfgrass diseases, the use of a mixed sward will reduce the severity and spread of the disease. Certain fungicides that are currently available for use on managed amenity turf have shown efficacy against these types of turf diseases and, where necessary, can be used as part of an integrated management programme. Always ensure that the disease is correctly identified prior to the application of any plant protection product.