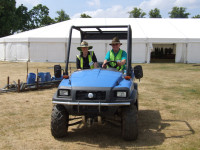 The world's biggest flower show provided the ultimate first-up test for New Holland's recently unveiled Utility Task Vehicle (UTV), the Rustler 120, as it was put to work at Hampton Court.

The versatile 4WD, launched in June, was used extensively before, during and after the Hampton Court Palace Flower Show, which ran earlier this month.

Well-respected horticulturist Jon Wheatley, who designed the Home Grown garden at the event, says the Rustler performed a number of tasks across the exhibit, which was the equivalent size of six Chelsea show gardens.

"We used it during the build up to ferry materials and tow equipment. It's an excellent piece of equipment, is adaptable and performed all the tasks we set it."

The multi-tasking UTV's rear load platform (available with a capacity of up to 476kg) performed very well, as did the three-cylinder, 20 hp diesel engine and lightweight, corrosion-resistant, aircraft-grade aluminium chassis.

"It's a fine tool as well as an enjoyable ride and was the subject of many enquiries and interest. I would recommend it without reservation," Mr Wheatley says.

The expansive garden took a month to prepare and focused on home grown agricultural and horticultural crops; at times more than 20 people were working on the project.

But despite the hard work Mr Wheatley says this year's design and build is his career highlight.

"I designed and contracted the project with two other designers and two contract managers all working with me. I have been involved in numerous projects during the last twelve years and have enjoyed considerable success at Royal Horticultural Society shows but this project was the highlight of my career because it encompassed agriculture and horticulture and was British."

But the garden and the Rustler 120 were not the only projects causing a buzz at the prestigious flower show.

New Holland joined forces with the BBKA in January to find ways to help Britain's beleaguered honey bees, whose numbers have seen drastic and alarming declines in recent years.

To encourage more people to keep bees and help boost the honey bee numbers, New Holland has helped to fund the new BBKA Course in a Case scheme, the first stage of a radical new three-year beekeeper self-development programme.

Tim Lovett, the former president of the BBKA says the flower show was the ideal launch pad for the Course in a Case scheme.

"Gardeners are honey bees' best friends and we were delighted to launch the Course in a Case at Hampton Court, in conjunction with New Holland."

The Rustler 120 and the BBKA were also on display at the CLA Game Fair which attracted over 150,000 visitors in the three-day show at Ragley Hall this month.

New Holland's marketing manager Richard Spencer says the manufacturer is keen to support the plight of the UK's bees, which is inextricably linked to the groundcare and agricultural industry.

"The partnership between New Holland and the BBKA is a natural fit, with both organisations committed to the environment. Honey bees are vital for all areas of nature, from gardens and horticulture to the successful harvest of oil seed rape, borage and other crops. The crisis in the honey bee population could easily become another crisis for UK farming so we want to join the BBKA in encouraging as many people as possible to get involved in beekeeping to boost the honey bee population," Spencer says.

For more information on New Holland products and partnership with the BBKA, please visit www.newholland.com/uk