Burgh Boys Club 2006 has set up home on the field on Toryglen Road after local man Eddie Smith spearheaded a restoration project. 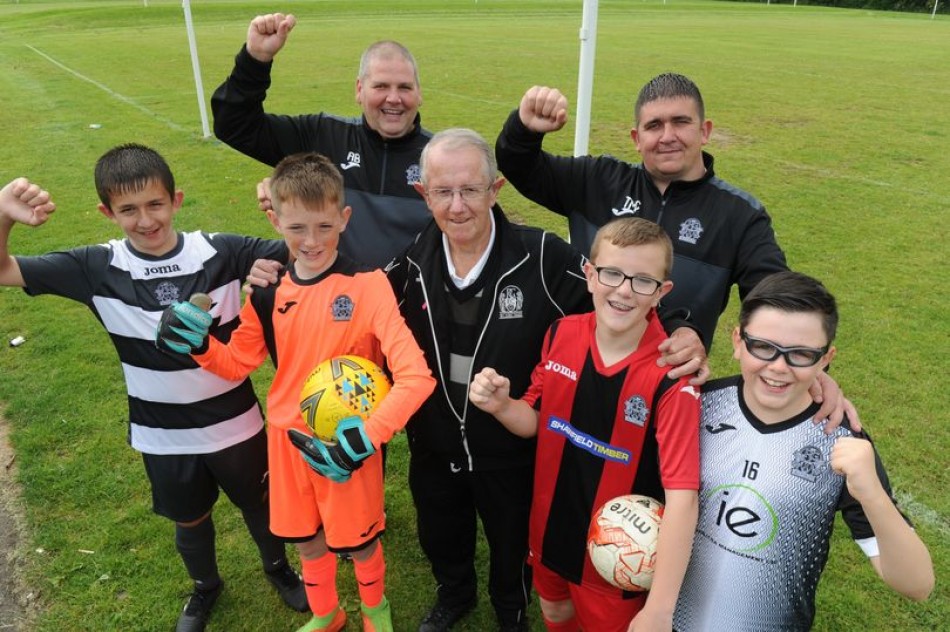 Youngsters desperate to play football now have their very own 'home ground' after a kind-hearted Rutherglen pensioner spent weeks transforming a derelict pitch into a perfect playing surface.

Burgh Boys Club 2006 has set up home on the field on Toryglen Road after local man Eddie Smith spearheaded a restoration project.

A groundsman for neighbouring Rutherglen Glencairn, Eddie used his 42 years experience to create a surface fit for games and training.

The Burnhill man has cut the grass, drawn lines on the field and, together with parent volunteers, painted goal posts and restored nets.

Alex Black, who coaches the team with Tony McDonald, said the club was indebted to Eddie and the wider Burnhill community for their support.

He told the Reformer: "To start with there was dog dirt on it, stones, people were on there on their motorbikes, but the local people have cleaned it up.

"Eddie is in his 70s and is the groundsman at Glencairn. He has been cutting the grass, painting lines on. He has been there every day of the week, he has been a godsend.

"The pitch is completely transformed. We played a match last Sunday and that is the first time in years it has been used by a team for a game.

"There was a great crowd too, about 60 people turned out."

Eddie was delighted to help out.

"I would do anything at all to help them or anyone who needed it," he said. "They have put a lot of work into the team for the last two years and they deserve a bit of help."

The upgraded pitch brings to an end years of touring around sports centres in Rutherglen and Cambuslang for the youngsters who have struggled to secure a regular booking at an affordable site in either town.

The team of 12 and 13-year-olds was, until recently, forking out £85 per session at Toryglen regional football centre. With training twice a week, the club was down £170 before any fixtures had been played.

As parents and the team struggled to justify the hefty bills, attention turned to the dormant pitch behind the site of the former Burnhill sports centre.

Alex, from Cambuslang, who became involved with the team when his son started playing football, says the efforts of the Burnhill community cannot be underestimated.

"The kids are great and the people are great," he said. "I have been going to Burnhill for just over a year with my son and for an area that has so much deprivation - they have had no help whatsoever - they have a great community spirit.

"Tony Mcdonald, he started the team. He has been up every other night telling people to take their dogs to another park and people are starting to buy into it. People are doing us favours, fixing fences and no one is taking a penny."

To show their appreciation to Eddie, who also roped in Glencairn manager Willie Harvey and other club members to help, the Rutherglen 2006s have renamed their squad Rutherglen Glencairn boys club 2006.

They have played five matches so far under their new name, winning three and drawing two.