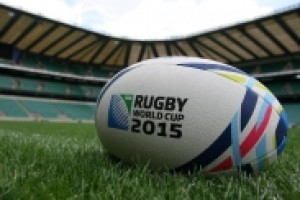 The cumulative attendance figure is set to break the one million barrier at the Millennium Stadium today when Wales take on Fiji as we approach the halfway stage of the competition (grounds have been at 94.51 per cent capacity on average) and the television viewing figures have hit new heights.

An audience of 20 million watched Japan's clash with Scotland back in Japan, making it the second biggest ever national television audience for a Rugby World Cup match after the 20.7 million that watched France play England in the 2007 semi-final.

Closer to home, a peak total of 11.6 million viewer's watched ITV's coverage of England v Wales on Saturday - the highest for a sporting event since the football World Cup final. The average number of people watching during the game was 10.4 million, meaning almost half (46 per cent) of everyone watching television at the time was tuned into the rugby.

And figures for social media platforms have been breaking new ground as well, with more than 60 million views recorded for videos on social platforms, over one million uses of #RWC2015 already and rugbyworldcup.com having received 18 million visitors so far.