The emotion of last weekend's final has had time to subside and the misty eyes have cleared but the cold, hard facts support the assertion that this has been the most successful Rugby World Cup ever 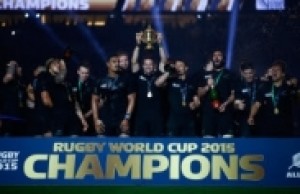 The tournament's commercial success has already been confirmed with almost 2.5 million tickets sold, generating £250 million, and the RFU confirming that its target of a £15 million surplus on top of ER2015's £80 million surplus has been achieved.

The WRU is also reportedly set to benefit to the tune of £10 million from the tournament as a whole after the Millennium Stadium was used to stage eight matches.

However, it is the global scale and reach of the 2015 Rugby World Cup that has perhaps been its biggest success as a total of 120 million people across the planet watched New Zealand's 34-17 win over Australia in the final on Saturday.

That is the huge rise on the global television audience of 33 million for the 2007 final and the showpiece occasion in 2011 is thought to have attracted a similar figure.

It is unclear how many viewers were glued to their screens in new and emerging rugby nations but 97 per cent of the total global audience for the 2007 Rugby World Cup final came from the old Five Nations and Tri Nations countries, so significant progress has been made since then.