0 Ryegrass driven off the fairways 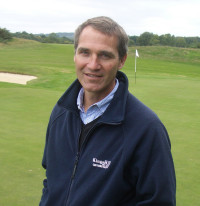 Every time a golfer takes out a divot, it creates an opening for unsightly Ryegrass to spring up. Even essential aeration operations can produce sufficient soil exposure for aggressive grasses to germinate. It's a constant battle for Duncan Kelso, Director of Golf at Kings Hill Golf Course.

The former hop gardens and fruit fields in the rich Kent agricultural land were always going to be an ongoing reservoir of Ryegrass to infest the Fescue-sown fairways on the 90-hectare course, built 16 years ago. "You can't help that, it's the nature of things," accepts Duncan. "It wasn't long after establishment that Ryegrass clumps were spoiling the even, Fescue appearance and the playability of the fairways.

"I'm a dedicated Fescue greenkeeper, a traditionalist if you like," says Duncan, who began life in the golf industry as a trainee greenkeeper, went onto golf course architecture and construction, before returning to course management. "When you seed a whole new course with Fescue it thrives beautifully and, on the day you open, it looks immaculate - alien free.

"For 10 years or so at Kings Hill it was irksome to see Ryegrass getting in on the act, gradually disfiguring what we had created. There was nothing we could do about it, short of physically getting on our hands and knees and digging it out. Then Rescue came along and we had a real means of tackling it." 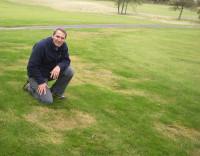 Duncan was one of the first pioneers to try out the new selective herbicide option, initially during its development phase, and then undertaking a series of trials with Simon Barnaby and John Noyce of Everris Limited (formerly named Scotts) to evaluate options and identify the best recommendations for other greenkeepers. Now, Rescue is an integral part of his spring and autumn management plans, to keep the David Williams designed course in top condition.

After successive years of targeted treatment on different areas, Duncan believes he is now on top of the issue, but Ryegrass remains a persistent scourge. "We want to maintain Fescue fairways and tees, so that's where we've been spraying it since 2009, and it works," says Duncan. "We reckon that if we aim to cover six or seven hectares of fairway each year, it won't be long before the whole course is under control. Worst first is our application priority."

He highlights that one of the worst characteristics of Ryegrass is that in dry conditions it stalks and seeds, not simply upwards but laterally, so it gains competitive dominance over other species. It suppresses fine grasses by shading them out and becoming an ugly nuisance.

"We've managed to pretty much drive it off the fairways. Some have no visible infestation whatsoever," he reports, "though there's still work to be done. We are now simply trying to stop its progress, so it doesn't develop into a major problem and really get noticed by players. I think we're keeping ahead of the game. 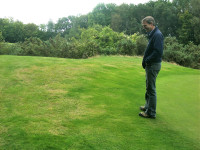 "Putting my golfer's hat on, and I always try to view it as a golfer when making decisions, I would notice a horrible clump of stalky Ryegrass if my ball landed up against it. Players now expect better on a fairway."

Duncan acknowledges that accurate application is important to get the correct rate applied. He uses a Gambetti sprayer with a 5.5 metre shrouded boom that avoids any risk of drift and minimise disruption to golf. He says he can spray a fairway in about 10 minutes.

"We've learnt here that Rescue is at its most effective if you apply when there is good soil moisture, active growth in the Ryegrass and the possibility of rain in the following days; so autumn and spring are the best times."

Where there is sizeable 'dinner plate' patches he believes it's best to go for spring first. "It won't remove 100%, but we've found it does open it up and give Fescues a competitive advantage in re-establishing," advises Duncan. "Spraying again in autumn eliminates any surviving Ryegrass. It has to be a program of action, ideally over a three-year period. It's a matter of developing an ongoing strategy and finding what works best for your course."

Duncan believes that on long established courses - those more than 20 years old, for example - there's likely to be a wider variety of grass species in the sward, so it may take more effort to get rid of any Ryegrass. On newer courses where they've seeded with one particular species and find invasion from Ryegrass occurring, he says Rescue will readily help to get on top of it. Also, on links or heathland courses where Fescue is predominant, Rescue will actively keep it so.

"Ultimately, it is the golfers who benefit by playing on a more consistent surface throughout the year. After all, it is satisfied members that keep us all in business." For further information go to www.grencast.co.uk