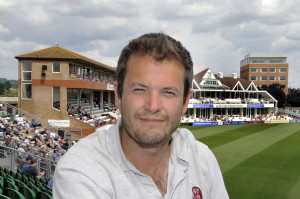 As has been the case for every groundsman throughout the UK, the past two years have proven challenging. The drought of winter 2011-12 gave way to a deluge of rain that has continued into 2013. Add cold winter weather and, well there is no point in going on about what we all know.

Simon Lee, Head Groundsman at Somerset County Cricket Club, has been with the club since 2001 and says he has not really done anything different at the Taunton grounds over this past autumn and winter than he would have in a more normal year.

His timings may have altered to reflect prevailing weather but the routine scarifying, re-seeding, mowing, rolling and turf treatment regimes have all been carried out as 'normal'.

"The main thing I have done is to keep a close eye on things," says Simon. "The grass has coped well; it has been under water at times. Root growth has also been slower as the turf has not needed to go down to find moisture. But the key is to know what is going on and react accordingly. We carry out a number of simple maintenance tasks, the trick being to do them at the right time and do them over and over again."

When he became Head Groundsman in 2010, Simon noted that the outfield had a few bare patches where fescue and bent varieties in the existing sward had died due to the dry summer and a thatch layer.

We worked on the outfield that winter to remove the thatch and reseeded with fescues and bent grasses but due to a dry winter they didn't take so we then moved onto the 100% rye grass mix the next winter for reseeding.

"Ryegrass does well on this ground," he says. "We mow the outfield to 18 to 20mm in season and retain the same height for the squares over winter. This higher cut helps stop the grass in the squares struggling and promotes good establishment ahead of play.

Keeping the outfield grass trimmed to a height that is somewhat higher is to do more with how the ground plays. Our short boundaries need to be countered by reducing the ball speed to prevent too many fours. It makes play fairer."

The squares are overseeded with Johnson Premier Wicket, a perennial ryegrass mix formulated with 50% Dickens 1 and 25% of both Chardin and, new for 2013, Natasha. Combining rapid establishment, high disease resistance and a tolerance of close mowing, Premier wicket also has an attractive colour.

The latter is something appre 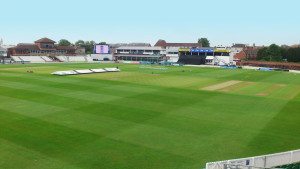 ciated by players and spectators alike. For the outfields, Simon has adopted Johnson Court for the job. This ryegrass mix again contains Natasha for 2013 at 50%, with Libero making up the balance.

"In season we switch to Ji Premier Wicket with the Johnsons iSeed nutrient coating," adds Simon. "iSeed helps promote fast germination and establishment, key factors in ensuring the squares can be enhanced between play.

We punch holes into the turf, broadcast the seed on top and then brush it in. This works well. Typically we use around 10 bags of iSeed coated mixes in the summer, the nutrient coat ensuring the grass gets off to a good start as it germinates."

Simon is diligent to the need of the turf throughout the year but is particularly attentive as it enters winter. A light dressing of nitrogen fertiliser in October or into November is applied to help the grass keep growing in colder weather, with constant attention to seek out any problems.

If mild, the grass will be cylinder mown as required, rotary mowing having been dropped to ensure a good clean and even cut out of season.

"I will apply fungicide and some amino acid as I see fit, but along with rolling, scaryfing and mowing that is about it," adds Simon. "The key is to ensure the ground is overseeded and populated with the right grass species and varieties to suit the ground.

A ryegrass mix for both outfield and squares really suits us at Taunton. The turf plays well and has a good appearance too."