by External source
in Football and People
on 19 May 2017 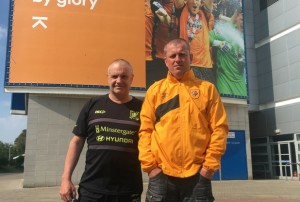 Two KCOM groundsmen who claimed they were sacked over the state of the pitch have set up a crowdfunding page to take their bosses to an employment tribunal.

Darrell Cook and Mark Harrison say they were dismissed a month ago by the Stadium Management Company (SMC) for gross misconduct after claims the pitch, used by Hull City and Hull FC, had been deteriorating.

Darell, 55, says he was also told he was being sacked for working as a kit man for Hull FC while Mark claims he was told another reason for his dismissal was down to ordering too much grass treatment product. The third allegation Mark has made relates to allowing casual workers to turn up and repair divots in return for a match ticket. They were also told not to return.

Both men insist they did nothing to warrant their dismissal and were not given any warnings beforehand. They say they are not looking for compensation, they just want their jobs back.

Now, they want to hire Gosschalks Solicitors to fight their case but say they are worried about the costs.

In a joint statement, the two men said: "We don't want the inevitable attention this may bring but we had no other option if we were to fight for the jobs we love and to clear our names.

"This is not just for us but for our wives, parents and children. We're proud men who have always taken immense pride in our work. "We wouldn't normally be able to afford a legal challenge like this against such formidable opposition. There is no access to legal aid and we didn't earn big salaries so we hope the people at SMC understand why we had no choice but to take this route.

"We look forward to the day we can hold our heads high again and get back to work providing both Hull City and Hull FC with a playing surface both clubs and their fans can be proud of."

Darrell, of Sproatley, told the Mail of his shock at being dismissed.

He said: "I was told we were being investigated over the deterioration of the pitch. But I couldn't understand this as it resembled a bowling green.

"They also said they were looking into the work I was undertaking with Hull FC as a kit man. But this was something I did in my own time and didn't affect my work.

"This is a job I have done for 27 years and there was no indication anything like this was coming.

"Both myself and Mark have worked for the SMC for 16 years. We have never been in any trouble or had any reprimand so this came out of the blue."

Darrell said he has struggled to cope with what happened.

He said: "It has turned our lives upside down. Ever since I was 15 years old I have been in full-time employment. This is all alien to me. "I the morning now my wife goes off to work and my kids head to school and I just sit there thinking what is next for me."

The two men say crowdfunding is the only option as they bid to fight their dismissals at an employment tribunal.

Darrell said: "We have had to keep this under wraps for the last four weeks but now we are launching this crowdfunding page and need help.

"This is a way of getting the money we need for the forthcoming legal battle. While we could probably afford the tribunal fees we need to hire solicitors.

"Gosschalks have been brilliant and are willing to represent us but it will not be cheap. It would likely financially cripple both of us.

"The idea of crowdfunding has alleviated that worry a little. We are both well-known and I hope well-liked so we would like to think we'll get some support."

The two men say they are only seeking justice at the tribunal and have not issued proceedings.

In the statement, they said: "We know that a sum of money like that will be small change for the people we are fighting against. To them we are probably nothing, history by now.

"The fact that we gave so much service to Hull City and Hull FC means nothing. The fact that we have lost our livelihoods in such a publicly embarrassing way appears to mean nothing to them either. 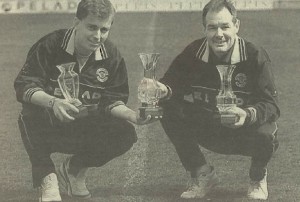 "We want to hold them to account through the proper process where an employment tribunal judge looks at everything fully and fairly.

"We want to clear our names. We actually want to get our jobs back and a tribunal can order that. We were proud to be involved with Hull City and Hull FC - we just want to get back to work and continue that association for many years to come."

Their campaign has been called Pitch For Justice. Visit www.crowdjustice.com/case/kcom-stadium/ to donate.

The SMC declined to comment in detail on the claims by the two groundsmen.

But a spokesman said: "After seeking legal counsel the club have been advised not to comment on this matter due to its ongoing nature and potential for a further appeal."

If you would like to visit the original article please visit HERE.