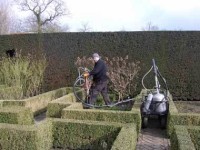 The fight is on to save Vita Sackville-West's Yew hedge walk from Phytophthora fungus.

Planted in the 1930s, along with the rest of the famous garden at Sissinghurst Castle in Kent, the two 100-metre square clipped, parallel hedges had been known to be suffering from this common blight (which attacks the tree's roots) for some time.

"It's probably been in the soil for 10 years," says head gardener Alexis Datta, who has been at Sissinghurst since 1991. "We put in extra drainage to alleviate the water-logging about 9 years ago and had the soil analysed in 1996. Since then we've been treating the whole area with Aaterra fungicide, which seemed to keep the Phytophthora in check until last year when it suddenly got much worse. By the back end, parts of the avenue looked really brown and one section was particularly bad."

As Phytophthora is a water-loving organism, Alexis installed new herringbone land drains up to the hedge and hired Suffolk based Terrain Aeration to apply deep compressed air de-compaction treatment as close to the Yews as possible.

"We'd decided to fight the problem naturally using a product from Plant Health Care called Complete Plus which is a blend of bacteria, streptomycetes (organisms mid way between bacteria and fungi) and beneficial fungus which would help the trees fight off the Phytophthora," continues Alexis. "But if the root zone was continually wet, the problem would always be present."

Jason Holohan, Plant Health Care's M.D., who has successfully used this product to treat the disease at two other National Trust Properties, agrees that solving underlying drainage problems is crucial. "If you don't deal with the root cause, the problem will just return," he says.

Terrain Aeration visited Sissinghurst at the beginning of January, and using Airforce Tracker their latest pedestrian aeration machine, applied deep compressed air de-compaction treatment along the outer perimeter of both hedges, inserting air under pressure one metre down to create fissures and fractures, and injecting dried milled seaweed on the final air blast, which will swell on contact with moisture and keep the air channels open.

"The avenue is paved between the yews, so we could only treat the hedge on one side," explains David Green, Terrain Aeration's 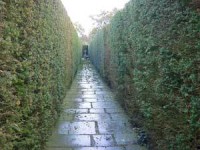 By the 10th. of March, the company was back with Airforce Grasshopper, the smallest, lightest aeration machine to date, specifically built with a compressor to fit within the pattern of Sackville-West's box hedge design, and allow Terrain Aeration to finish the job. "We searched our archive of old photographs of various forms of the machine and found some clues," remembers Green. "We stripped the Airforce mast assembly to the absolute minimum and placed the air blast pressure vessels in a small wheeled trolley. By using extra long control and blast air lines we were then able to get between and over the low hedges and amongst the plantings of both the White Garden and the rose beds."

Now that the area had been de-compacted not only bringing air into the root zone but also aiding the efficiency of the drainage system, Alexis waited two weeks before applying Compete Plus. "The product colonises the root zone and must be watered in," she says. "It's best to do this either when it's raining or when rain is forecast, and following Terrain Aeration's departure we had a dry fortnight!"

Alexis has been repeating applications every two to four weeks until the start of new growth, but it will be mid summer before the success of the treatment can be assessed. "If it saves our hedges it will definitely be worth it," she maintains.

For further information on the deep compressed air de-compaction treatment provided by Terrain Aeration, contact the company on Tel: 01449 673783 or visit their website at: www.terrainaeration.co.uk