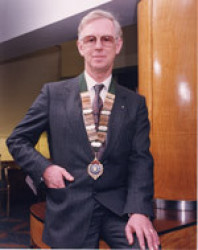 Paul Seward, founder of the largest farm and garden machinery dealership in N. Yorkshire has died of cancer, aged 64yrs.

During his term of office as National President of BAGMA, from 1992 to 1994, Paul helped increase training throughout the whole of the industry, taking it to sales staff and the spare parts sector. He was instrumental in bringing about the merger of BAGMA and the British Hardware Association, and praised for his ability to connect the right people and motivate them.

Latterly, having sold his business interests, (the turf maintenance sector was bought by his son Michael), Paul involved himself with The Yorkshire Museum of Farming, serving first as trustee and then as chairman from 1990 to 1999.

As an entrepreneur, his success rested as much on his interpersonal skills as business acumen. He was known throughout his life for his ability to select the right person for the right job, and recognise and develop individual potential.

He will be deeply missed.