0 Safe application solution for weeds with a difference

Tall weeds present big problems for arable and horticultural crops, pasture and amenity grass swards and wild flowers. They establish themselves at the expense of other plants by reducing and depriving them of light which is necessary for the crops to thrive. As well as their height, tall weeds have the added advantage of easy and effective seed dispersal by wind or birds.

It is impossible to chemically control tall weeds in crops, pasture grassland and conservation areas using standard spray application techniques without risking the integrity and safety of plants below and those in surrounding areas. Target profiles presented by tall weeds require a correspondingly high off the ground spray which is more prone to herbicide drift into surrounding areas. Moreover, drips or splashes from tall weed foliage can contaminate the very plants the operator is trying to protect.

WeedSwiper offers a safe and cost-effective solution to the problem. It applies herbicides through direct contact with tall weeds exploiting the height difference between weed targets and the valued plants below. Using this method of application, the actual height of weeds is less important than the height difference and it can be successfully used to control moderately tall weeds in low profile crops just as well as the classic tall weeds in well grown pasture and amenity grassland.

The Micron WeedSwiper delivers non-drip brush contact with weed foliage via herbicide moistened pads. Providing there is a minimum 150mm (6 inch) difference in height between the crop or grass sward and tall weed targets then safe and effective control is assured. WeedSwiper's sensor controlled placement of herbicide on the weed foliage by direct contact eliminates any risk of spray drift and drips. 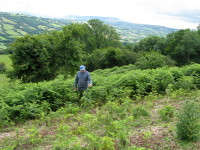 WeedSwiper uses selectivity as an application technique instead of herbicide mode of action to achieve highly targeted weed control thus allowing use of total (non-selective) herbicides which cannot be sprayed over arable crops, pasture grassland and conservation areas. Spray drift risk is eliminated and product application rates can be as little as 5 per cent of those used for boom spraying.

Consistent control of pad wetness is the key to safe and successful weed control with WeedSwiper. The Hydrostat electronic control system regulates and controls the amount of herbicide transferred to weed plants by switching the pump on and off in response to changes in the amount of herbicide in the pad. The pad is continually saturated for maximum effective transfer of herbicide to weed foliage but never over-saturated to cause dripping, irrespective of travel speed or weed density.

The WeedSwiper works off a 12 volt power supply and is compatible with specific units for tractor, quad bike (using the trailer) or trailer-mounted operation depending on situation, choice and requirement. Units have a simple boom end break-back return system and are available in 6, 3 and 2 metre foldable options to enable operation at narrower widths. The 6 metre unit can be used fully open at 6 metres or folded at 2.45 metres (centre only) and 4.22 metres (offset left or right). The 3 metre unit can be folded and used at 1.00 metre (centre only), 2.00 metre (offset left or right) or fully open to 3 metres. Similarly the 2 metre folding unit can be operated at 1.00 metre (centre only), 1.50 metres (offset either left or right) or fully open to 2 metres. The two metre unit can also be supplied in a non-folding version.

Further increasing WeedSwiper's versatility each model's pad height can be adjusted to suit different terrains and target weed heights. All units are supplied with pad covers to prevent accidental contamination and to safeguard operator safety.

Produced from a strong and tufted 'state of the art' material with premium fluid retention properties, the 150mm (6 inch) deep pads provide a three-dimensional reservoir of active ingredient and offer a large herbicide transfer area to ensure each target weed receives a sufficiently high dose of active ingredient on contact with the pad.

Pad wetness is continuously measured by sensors in the pad material and information relayed to the Hydrostat controller:
• Variable settings on the controller regulate pump output to the pads and only replenish fluid after it has been 'swiped' onto the target weed plant
• A scale of settings (0-9) on the controller is used to determine dilution rate of the active ingredient
• Sensors inside the pad material constantly measure pad wetness and the Hydrostat control system replenishes fluid only as required
• The pad cannot receive fluid in excess of that allowed by the Hydrostat setting selected by the operator, thus preventing dripping and damage to non-target plants
• Settings can be altered 'on the move' if required

All units come with one tank for pre-mixed herbicide solution and another for clean water. The water is used to wet the pads close to saturation point before operational weed swiping and to flush the WeedSwiper after operation. Brushing with detergent may also be required to remove any soil and plant wax from the pads.

WeedSwiper can be used to control weeds in sensitive crops providing the required 150 mm (6 inch) height difference exists, irrespective of the actual heights of crop plants and weeds. For instance, it can safely and effectively control fat hen (Chenopodium album) - a serious horticultural weed - when it is still relatively small in crops like chicory because of their low profile.

Additionally, WeedSwiper can be used on individual crop plants that have 'broken-away' from their 'normal' growth pattern and have essentially become tall weeds requiring control. A classic case is sugar beet where WeedSwiper is used to safely kill 'bolters' in the crop.
WeedSwiper in grassland

As well as crops, WeedSwiper is suitable for use in a wide range of agricultural and amenity grassland and other sensitive open habitats to control a broad spectrum of weed species and growth.

It can also be used to successfully control five native plant species which are defined and listed under the 1959 Weed Act as 'Injurious Weeds'. Spear thistle (Cirsium vulgare), creeping thistle (Cirsium arvense), common ragwort (Senecio jacobaea), broad-leaved dock (Rumex obtusifolius) and curled dock (Rumex crispus) pose particular weed problems for agricultural grassland and livestock farmers. Whilst all are best controlled in spring using hand held applicators like the Micron Weedstick and Micron Microwipe when still in the vegetative state as a 'rosette' of leaves, WeedSwiper is ideal for targeting these weeds during summer when they are approaching maturity and presenting tall stems.

Furthermore, WeedSwiper can help to protect lowland heathland which is under constant threat from a wide range of pioneer tree species including birch (Betula sp), common ash (Fraxinus excelsior), sallows (Salix sp) and common alder (Alnus glutinosa). As these tree species respond with rapid re-growth (coppice stems) after cutting, Weedswiper is the most cost effective way of dealing with the problem and protecting the heather-based heathland environment.

Bracken (Pteridium aquilinum) now occupying 6-7 per cent of UK land area and spreading at 3 per cent in area annually across a wide range of upland and lowland open-habitat environment, including lowland heath, is a prime target for WeedSwiper.

In summary, WeedSwiper is recommended for use in:
• Pasture and amenity grassland to control a wide range of weeds including ragwort, docks, thistles, stinging nettles (Urtica dioica) and rose bay willow herb (Chamerion angustifolium)
• Uncropped farmland to manage herbaceous weeds like ragwort and woody weed growth including seedling trees and buffer strips around water, cultivated margins and beetle banks
• Moorland, heathland and other rough grazing land for control of bracken, broom (Ulex scoparius) and pioneer tree re-growth
• Marshland and wet meadows to control rushes (Juncus sp) and other moisture loving tall weeds
• Riparian strips and other areas along waterways and watercourses, and around lakes and ponds, to secure environmentally sensitive management of rush and reed growth and alien invasive weeds like Japanese knotweed and Himalayan balsam.