by Joe McConville
in Consultancy
on 29 Mar 2012 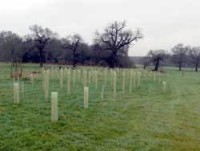 Trees represent an important resource for the environment. They provide carbon sequestration, replenish oxygen, provide habitat for vertebrates and invertebrates and, when trees die, they can be utilised for various products. In the early days, golf balls were made from the Gutta-percha trees (Eucommia ulmoides), which was used to make the 'guttie' golf ball.


As with all resources, trees need to be managed. Young trees need to be tended and protected from pests. Trees have a natural life span, and some species live longer than others, oaks will live well over 300 years, whilst cherries may only live seventy years. As trees get older they are more prone to disease. Different species will be attacked by different pathogens. 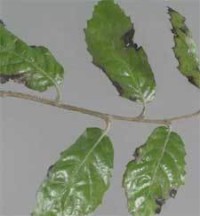 The disease pathogens are often latent in the environment and, as the tree ages and loses its ability to defend itself, it becomes more prone to infection.

Some pathogens are more aggressive and will attack vigorous trees and generally result in wide spread damage to the tree stock. A classic example of such a disease was Dutch Elm Disease which did so much damage in the 1970s and 1980s. The current cause for concern is Phytophthora ramorum, described in the USA as sudden oak death syndrome. This fungus is infecting Japanese larch, but has been found on other species growing in close proximity to infected larch.

Golf courses that are built in existing parkland settings will also utilise existing mature trees as obstacles to define the golf course layout, and define the character of the course.

Good tree management should be proactive; the financial requirements should be evaluated and integrated into annual operational budgets. In order to evaluate the financial implications, the golf course should prepare a tree strategy. This is a document which sets out how the overall tree resource is to be managed. It provides the means for moving away from reactive crisis management to a more proactive approach. A tree strategy provides a clear rationale for ensuring that adequate resources are allocated on an ongoing basis.

An important element to any strategy is having a risk management programme whereby trees will be subject to regular inspection, especially older trees.

In order to prepare a meaningful strategy it is important to have a comprehensive inventory of tree resource.

When managing trees on a golf course for risk, certain criteria need to be considered. The landowner has a duty of care under the occupier's liability act to ensure that anyone entering onto the land is not at risk of injury. Therefore, it is important that trees, or parts of trees that are potential hazards, 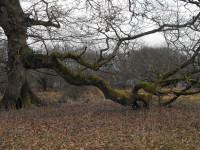 have been identified and appropriate action is taken.

In the event of an incident, in order to avoid being held legally responsible for that incident, a landowner must be able to prove due diligence and show that all possible and reasonable precautions have been taken, and that proper checks and records were made.

When undertaking a hazard risk assessment, an important consideration is the potential target. Where a tree with defects is located in an area, which is rarely, or occasionally used by golfers or staff, it may be acceptable to retain such a tree which, if it were in an area of frequent use, would warrant immediate felling.

When assessing trees, an understanding of the trees biology and growth habit are important, together with a knowledge of the diseases and defects that are likely to affect them.

There are three areas of a tree, which need to be reviewed:
1. The roots, root buttresses and lower stem
2. The stem and branch structure 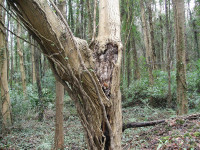 Each area will have specific issues that may need attention.

As trees age, they are more likely to be affected by root and butt rots. These are decay fungi, which are part of the natural environment, which can weaken the structure of the timber in the tree and render it prone to failure. The fungi are often tree species specific. Different fungi have different pathology and, whilst the presence of some fungi can mean the risk of immediate failure, others are very slow degenerating fungi and their presence may not require immediate action. For example, the presence of Ustulinia on beech is usually very serious, whilst Beefsteak fungus on oak is a manageable pathogen.

Decay fungi produce brackets, fruiting bodies (mushrooms). These can be annual, and annual brackets are seasonal. Dryads saddle appears in May/June, and Giant Polypore appears in the autumn, late August-October. The brackets can also be perennial, that is they remain on the tree and often increase in size every year.

Being able to recognise each fungal bracket is important, and appreciating its significance is critical. Field guides such as the Arboricultural Associations publication An Arborists' Field Guide - Fungi on Trees, is a very useful booklet to identify the various common fungi that cause problems for trees.

It is important to examine the base of trees for basal cavities, wounds on root buttress and movement or cracks in the soil, which can be an indication of root 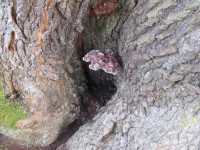 problems even in the absence of fungal brackets.

Bleeding cankers, both bacterial and fungal, will produce tarry exudates from the bark, which can be terminal for some species, such as Horse chestnut infected with Pseudomonas syringae pv aesculi.

Structural defects may also show up on the stem, such as spiral cracks, increment strips, and buckling and loose bark. Bark creases and cracks are often an indication of internal weakness in the stem.

The presence of ribs on the stem, these are protrusions on the stem, which are indicative of an internal crack. Pointy-nosed ribs are often more dangerous than snub-nosed ribs. Non-uniform swellings in the stem can be an indication of internal defects and possible failure points.

The crown of the tree can also pose problems, especially in mature trees such as unions, which are points of potential breakage.

These are most problematic in maples and beech.

Trees which have been previously pruned and that have produced regrowth, which is often multi-stemmed, can be at risk of breakage due to top-heaviness or end loading. Remedial solutions may include restorative pruning or, in extreme cases, felling.

Trees with a dense branch structure can have rubbing/crossing branches which are weakened and at risk of breakage.

As trees age, branches start to sink, this can be observed as gaps appear in the canopy. Sinking branches can be at risk of failure. Options for remedial action can include branch reduction or cable supports.

The foliage in the canopy of trees can often be an early indication of serious problems. Reduced leaf size, or leaf density, can 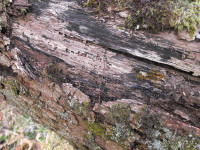 be indicative of root and systemic problems. Trees will often suffer from aesthetic foliage problems such as Guignardia leaf blotch of Horse chestnut, Tar spot on sycamore or a more debilitating foliar disease, such as blossom wilt of cherry.

As mature trees decline they start to retrench, that is, the distal parts of the canopy are shut down. This manifests itself as crown die back. This can be a very obvious early indication of tree decline, especially during the summer months.

Trees can also go into decline as a result of non-pathogens. Trees struck by lightning will have bark cracks and localised area of crown die back. Chemical damage from herbicide spray will cause foliage die back.

Insect damage is not generally a serious problem, especially when there are cold winters. However, during mild winters, insect populations can build up in sufficient numbers to cause foliage problems; conifers are more at risk, for obvious reasons. In the past, problems with cypress and spruce aphids have been significant.

Once potential serious defects are identified, a management solution needs to be considered. One option is to move the target. This may involve restricting the public from the area or closing part of the course during periods of extreme weather.

Remedial tree works should be considered; this may include branch removal, crown reduction and lateral branch reduction, and supporting weak branches with cables or braces. Trees, which have suffered root compaction, can have the ground decompacted with an air spade, and then mulched, which can help restore root vigour and reverse decline. All remedial tree works should be carried out in accordance with BS3998: 2010.

Trees which are in decline or may, in fact, be dead or dying, have a very important part to play in the environment. Where possible, deadwood should be left in trees for invertebrates, and, where possible, dead standing trees should be maintained. These can be cut back to 'hat stands' or poles as appropriate, as they provide habitat for invertebrates, bats, birds and potential feeding and nesting habitats. Not to forget hunting and plucking perches for birds of prey.

Before embarking on a dramatic solution, which may include felling, specialist advice should be obtained from a suitably qualified and competent arboricultural consultant.

This article first appeared in Greenside magazine, the official publication of the GCSAI. www.gcsai.org