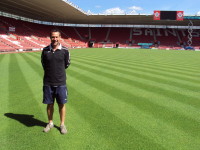 A new fertiliser from British Seed Houses is proving to be a God-send to the Saints. Andy Gray, Head Groundsman at League 1 side Southampton Football Club, tried Fertilis Swing for the first time in preparation for the new season, and has been highly impressed with the results.

Andy, who was promoted to his current role two years ago, takes care of the St Mary's Stadium pitch , while a number of collegues look after the training facility at Marchwood.

Around 40 fixtures take place at the St Mary's Stadium each year, so pitch renovation is an important task to provide a top quality playing surface that will keep performing throughout the season.

Fertiliser plays an essential role in getting the new seeds off to a good start, but this year, Andy wanted to try a different product.

"Sandy Pentecost from BSH visited me and told me about Fertilis Swing, a new fertiliser with a 'key ingredient' so I thought I would give it a try," he explains. "It is unusual really because it was first developed for use on golf courses. Football clubs seem to be catching on because I know that other clubs are using it now as well."

Andy took the top of the pitch off on 1st June, before turning the topsoil over on the 2nd and 3rd. The pitch was then re-levelled and seeded on 4th June.

He purchased 12x25kg bags of Fertilis Swing, an organo-mineral NPK fertiliser with magnesium, sulphur along with trace elements Boron, Iron and Zinc, and applied it at the same time as seeding.

"Because I was tight with time this year, I had to put the 'pre seed' fertiliser application down at the same time as the seed, rather than before seeding, which is common place as it prepares the soil for the seed," he explains.

"Two weeks after the first seed and fertiliser is laid down, I do the first mow using a rotary mower - which is really quick."

"But the grass was more than ready to be cut after the treatment with Fertilis Swing. I noticed a strong sward and increased density. The pitch 'turned out' very quickly."

"Sandy commented that he was pleased to offer a product that enabled the pitch to be playable in five weeks from seeding."

The key ingredient in Fertilis Swing is Bacillus Subtilis, a naturally occurring bacterium used as a soil inoculant, and Andy comments that the new growth has been disease free as a result.

Andy uses a slow release, coated fertiliser quarterly throughout the year to keep up the good work begun by the main pre-seed fertiliser application of Fertilis Swing.

Once the new turf is established, he switches to a Dennis G760 cylinder mower to keep the pitch in trim, and makes sure that the turf has ready access to air and water by needle tining every two to four weeks, and using bigger tines and heave to aerate about four times a year.

As the new season gets underway, Andy says that the pitch continues to impress: "It's got a lovely dark, deep green colour, which gives a really good impression to players and supporters," he concludes.